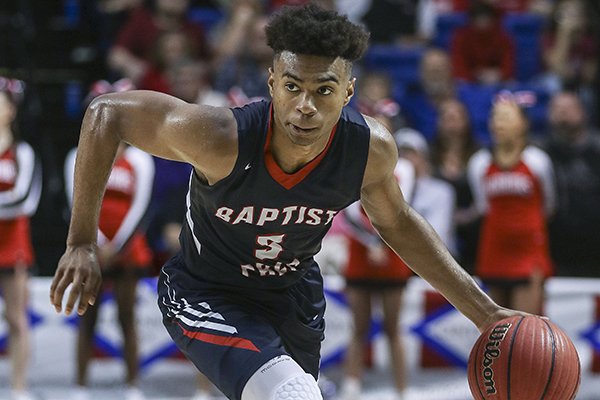 Baptist Prep guard Isaac McBride brings the ball up the court during the Boys 4A Basketball Championship Game against Jonesboro Westside on Saturday, March 10, 2018, in Hot Springs.

FAYETTEVILLE — Former Baptist Prep guard Issac McBride, who announced in mid-September he was transferring from Kansas, has committed to Vanderbilt.

McBride, 6-1, 185 pounds, signed with Kansas over offers from Arkansas, Auburn, TCU, Tennessee, Oklahoma State, SMU and others in November during the early signing period.

He was named the Arkansas Democrat-Gazette boys player of the year after averaging 28.9 points, 4.5 rebounds and 4.1 assists per game during his senior season. He was also the 2019 Arkansas Gatorade Player of the Year.

McBride, who did not have an offer from Arkansas the second time around, averaged 24.5 points, 4.0 rebounds, 2.5 assists and 1.6 steals per game as a junior while shooting 51 percent from the field and 45 percent beyond the 3-point line, leading Baptist Prep to a third consecutive state championship.

He had scholarship offers from Arkansas-Little Rock, Abilene Christian, Arkansas State and other mid-major programs, but exploded onto the national scene with an outstanding Fab 48 tournament in Las Vegas on July 26-29 of last year while playing for the 17-under Joe Johnson Arkansas Hawks.

McBride is expected to enroll in January and be eligible to play the following January.