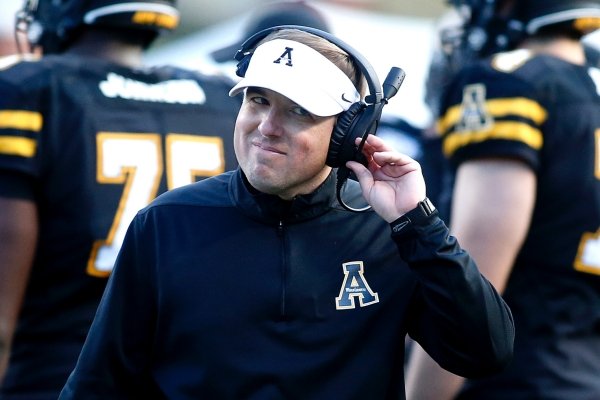 Appalachian State head coach Eliah Drinkwitz makes his way back to the sidelines during the second half of an NCAA college football game against Louisiana-Lafayette in the Sun Belt Football Championship on Saturday, Dec. 7, 2019, in Boone, N.C. (AP Photo/Brian Blanco)

KANSAS CITY, Mo. — Missouri reached an agreement Sunday with Eliah Drinkwitz to take over the Tigers' once-proud football program, a person with knowledge of the hiring told The Associated Press, making Appalachian State's successful coach the second-youngest in a Power Five conference.

The person spoke to the AP on condition of anonymity because the contract was still being drawn up and the school had not made an announcement. Drinkwitz was also being pursued by SEC rival Arkansas for its head-coaching vacancy.

Tigers athletic director Jim Sterk said he wanted to move swiftly in hiring a replacement for Barry Odom, the former player and assistant coach who went 25-25 in four seasons leading the program. Odom was fired late last month after the Tigers finished an underwhelming 6-6, which would have been good enough for a bowl berth had the school not been slapped with a postseason ban by the NCAA following an incident involving a rogue tutor.

Drinkwitz will inherit a program that also must deal with scholarship and recruiting restrictions as part of the fallout.

The 36-year-old coach is a considerable gamble for Missouri because of his scant head-coaching experience. Drinkwitz worked under Gene Chizik and Gus Malzahn at Auburn, Bryan Harsin at Arkansas State and Scott Satterfield at Appalachian State, giving him plenty of experience from some of the best in the business. But his lone year in charge of a program — at any level, including high school — was this past season with the Mountaineers.

Still, this past season was a spectacular success.

Appalachian State (12-1) rolled through its first seven games, beating North Carolina on the road, before stumbling against Georgia Southern. That wound up being the Mountaineers' lone loss after they ripped off five straight wins capped by a victory over Louisiana in the Sun Belt championship game.

It's unclear whether Drinkwitz will coach the Mountaineers against UAB in the New Orleans Bowl on Dec. 21.

“We're very excited about what we're doing at App State,” Drinkwitz said after the conference title game, "but at the same time every opportunity, you know, I owe it to the family — my family — for my family to see what's something that we're interested in. But I'm not in any hurry to leave. I feel strongly that we're building something special here.”

Most of the questions Drinkwitz fielded Saturday had to do with Arkansas, and for good reason: He went to Arkansas Tech, started his coaching career at a pair of Arkansas high schools, and later coached two seasons at Arkansas State.

“I don't have a lot of answers for you right now," he said. "I'm trying to process winning the first conference championship of my career, processing doing something that's never been done before, and I understand that you all got jobs to do, and it's going to be a crazy time, but the most important thing for me is just to enjoy the moment right now, and then we'll figure it all out.”

Earlier on Sunday, the Razorbacks hired Georgia assistant Sam Pittman to be its head coach.

Drinkwitz, widely considered a creative offensive mind, should stoke some passion from a Missouri fanbase that has grown tired of mediocrity to the point that attendance started to plummet this past season. And his hiring comes after reports that Sterk was interested in a series of candidates that included Army's Jeff Monken, Louisiana Tech's Skip Holtz and Arkansas State's Blake Andreson — all with head coaching experience but none with what could be considered a high profile.

Odom was hired four seasons ago to replace beloved coach Gary Pinkel, who had not only built Missouri into a consistent winner but helped carry that success into the SEC. He appeared to be on the right track, too, taking the Tigers to a couple of bowl games. But things began to fall apart with a season-opening loss to Wyoming, and Sterk said upon Odom's firing that the program had lost the “momentum” that had been built with a recent stadium renovation project.

Now, the Tigers are led by the second-youngest Power Five coach behind only Oklahoma's Lincoln Riley, and can turn their attention to rebuilding a program and fanbase that has grown weary of scratching just to make bowl games.