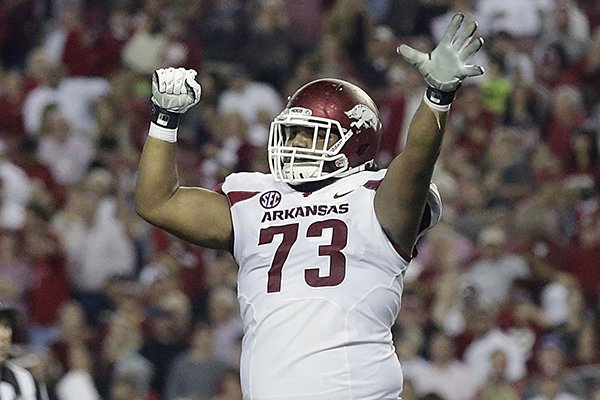 Arkansas offensive lineman Sebastian Tretola (73) celebrates after Arkansas scores against Alabama in the first half of an NCAA college football game, Saturday, Oct. 10, 2015, in Tuscaloosa, Ala. (AP Photo/Brynn Anderson)

To say former Arkansas offensive lineman Sebastian Tretola and his mother Mary are a big fans of Razorbacks coach Sam Pittman would be an understatement.

Tretola inked with the Hogs out of Iowa Western Community College and was was standout for Arkansas and Pittman in 2014 and was first team All SEC and an Associated Press All-American in 2015.

He was thrilled to hear of Pittman becoming the Razorbacks’ new coach.

“The best recruiter in the nation,” said Tretola, a Bernardino, Calif., native. “To be honest, (he was) the main reason I came to Arkansas. Doesn’t lie to you and makes you feel like you’ve been playing with him for years.”

Tretola’s mother, Mary, fought back tears when she learned Pittman and his wife, Jamie, would be heading back to Fayetteville.

Mary recalls Pittman being different from all the other coaches that recruited her son.

She said Sebastian was equally as fond of Jamie Pittman.

“He told me how much he loved Jamie and she was so loving and how the boys were a family with the O-line,” Mary said.

Tretola looked at Pittman as a father figure.

“Sebastian loved him because he doesn’t have a lot of male mentors,” Mary said. “Coach Pittman was a really like an authentic example of what it meant to be a good overall good man, a good husband, good coach, good leader. Sebastian really took to that.”

The communication from Pittman hasn’t stopped since Tretola left Arkansas. When Tretola was cut by the Tennessee Titans, Pittman reached out.

“I talked to him (Pittman) when Sebastian was down in his dark days and struggling, and he would call Sebastian,” Mary said. “He would talk to him and love him up and he would say, ‘Jamie and I are praying for you.'”

Mary called the Pittmans to notify them of Tretola signing with the Houston Roughnecks of the XFL.

“He said that’s the greatest news,” Mary said. “I then said Happy Thanksgiving to the Pittman family. I said I’m so thankful that you and the Mrs. have prayed and rooted for my son throughout his career. God is good. Love you all and Happy Thanksgiving. He’s the one that said, ‘I’m blessed by you guys in my life. I’m happy for you and Sebastian as well and I’m very thankful for you.’ That’s just who this man is.”

Sebastian and Mary are excited about the future of Razorbacks football.

“I can’t wait to see what he does with the Razorbacks. I can’t wait,” she said.