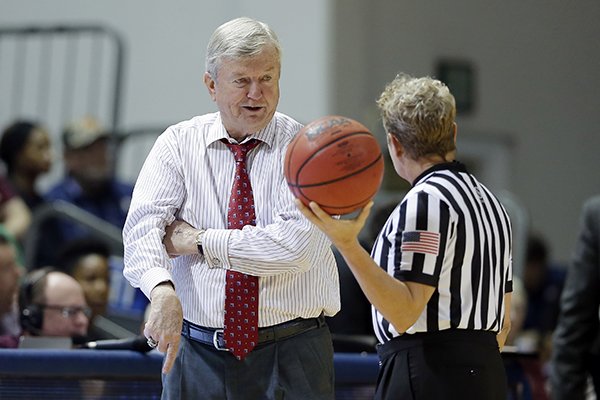 Texas A&M head coach Gary Blair, left, talks with an official after a foul call during the second half of an NCAA college basketball game against Rice, Sunday, Nov. 17, 2019, in Houston. (AP Photo/Michael Wyke)

COLLEGE STATION, Texas (AP) — Chennedy Carter scored 23 points, two other players had double-doubles and No. 11 Texas A&M gave Gary Blair his 800th win as a head coach with a 72-43 over Houston on Sunday.

Blair, who took over the Aggies in 2003 after stops at Stephen F. Austin and Arkansas, is the 11th Division I coach to reach that milestone and is the fifth active one. His teams have been to 24 NCAA Tournaments, 13 straight, and the Aggies won the national championship in 2011.

Dorian Branch, Dymond Gladney and Tatyana Hill had 10 points apiece for the Cougars (5-6).

Houston shot 28% for the game, was outrebounded by 14 and had 21 turnovers.