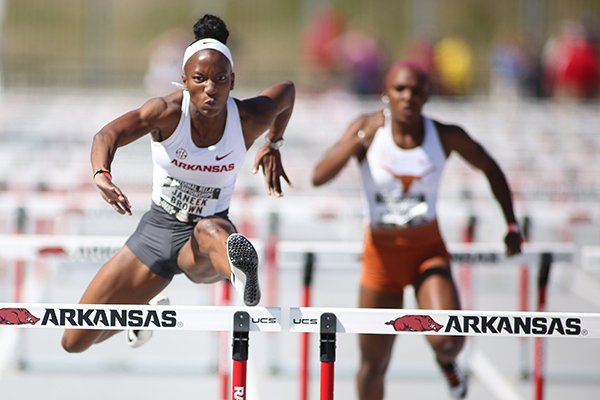 Arkansas' Janeek Brown runs the 100 hurdles during the National Relay Championships on Friday, April 26, 2019, at John McDonnell Field in Fayetteville.

FAYETTEVILLE — Arkansas could add one more accolade to its historic year on the track Thursday night.

Janeek Brown, who turned pro this summer after a standout sophomore season as a sprinter and hurdler for the Razorbacks, is one of three finalists for the Bowerman Trophy that will be presented in Orlando, Fla. Other female finalists for the award are former Florida jumper Yanis David and former LSU sprinter Sha’Carri Richardson.

The Bowerman, which is named for former Oregon coach Bill Bowerman, has been presented to one male and one female each year since 2009.

Brown is the second Arkansas female to be a finalist for the Bowerman. Pole vaulter Tina Sutej was a finalist but did not win in 2011. Jarrion Lawson won the Razorbacks’ first male Bowerman in 2016.

“If I were to win, that would be the best feeling to know that I’m the first lady Hog to bring the award home for my team, for my school,” Brown said. “I’d be on cloud nine.”

Brown was the 100-meter hurdles champion in 12.4 seconds at the NCAA outdoor meet in Austin, Texas, in June. It was the second-fastest time ever ran in the event.

She also had a fourth-place finish in the 200 and was a member of the Razorbacks’ third-place 400-meter relay team outdoors. At the NCAA indoor meet she finished fifth in the 60 hurdles.

“To be only a sophomore and to make that big a splash where you impress that many people to even be selected in the top three, that’s pretty unique,” Arkansas coach Lance Harter said. “That’s pretty special.”

The Kingston, Jamaica native burst onto the scene as a sophomore in 2019. She said she matured after her freshman year when she and sprints coach Chris Johnson often butted heads.

“It started off very rocky,” she said of their relationship. “I’ll admit, I was a little bit lazy my first year. I couldn’t finish workouts and stuff and he was pissed, not because I was lazy but because he saw the potential in me to do better.

“We became really tight my sophomore year and it paid off.

“I trusted my coach, Coach Johnson. He tells me to jump and I ask him how high. I don’t question anything else.”

“Win or lose, I feel good that I made it this far,” Brown said. “I’m at the Bowerman. That’s like the Heisman.”