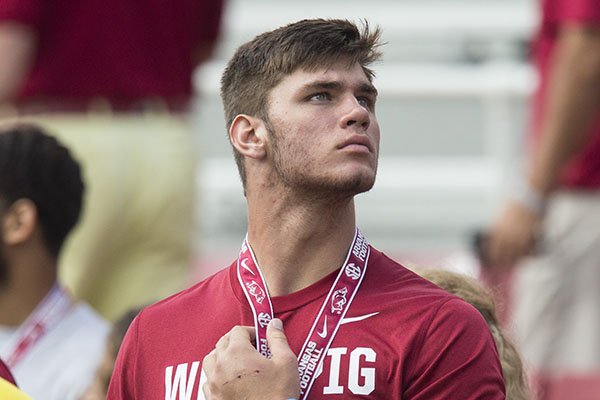 Hazen defensive end and University of Arkansas commitment Blayne Toll signed his national letter of intent with the Hogs in paradise.

Toll, 6-6, 244 pounds, 4.88 seconds in the 40-yard dash, committed to the Razorbacks after narrowing his list to Arkansas, Oklahoma, Ole Miss, Tennessee and Memphis in June. He also had scholarship offers from LSU, Auburn, Nebraska, TCU, West Virginia, Oklahoma State, Baylor and others.

He and his parents are in Cancun, Mexico, for vacation, but the place and date of his signing are just a coincidence.

"I honestly didn't realize it was going to be signing day," Toll said. "I'm just ready to make it official."

Toll came up with the idea of inking with the Razorbacks at the world famous Mayan Ruins.

"Since we were in Mexico," he said.

An ESPN four-star recruit, Toll is also rated the No. 20 athlete and No. 268 overall prospect in the nation.

Signing with the Razorbacks was a lifelong dream

"It's very exciting and very proud because I remember when I was just trying to get one college offer, and now I'm actually getting to live the dream to play college football in the SEC and in my home state," Toll said.

Toll committed to former coach Chad Morris and his staff on June 28, and he stayed firm with his pledge after Morris was fired, which is something new Arkansas Coach Sam Pittman noticed and discussed during an in-home visit with Toll and his parents last week.

Toll said he stayed true to his word because of the confidence he had in UA Athletic Director Hunter Yurachek to hire the right coach.

"He's real good at making decisions with the basketball coach, so I figured he was going to make a good hire in football, and he did," Toll said. "I really like Coach Pittman. I feel like he has a good track record."

He recorded 60 tackles, 35 tackles for loss, 16 sacks, 2 forced fumbles and 2 recovered fumbles with 1 returned for a score this season. He also rushed for 178 yards, 5 touchdowns and had 203 receiving yards and 2 touchdowns as a senior.

Toll said he believes Pittman is the right fit for Arkansas.

"He loves Arkansas, he knows Arkansas, and he's been in the Power 5 for a long time, and he knows what it takes to win in Power 5 conferences," Toll said