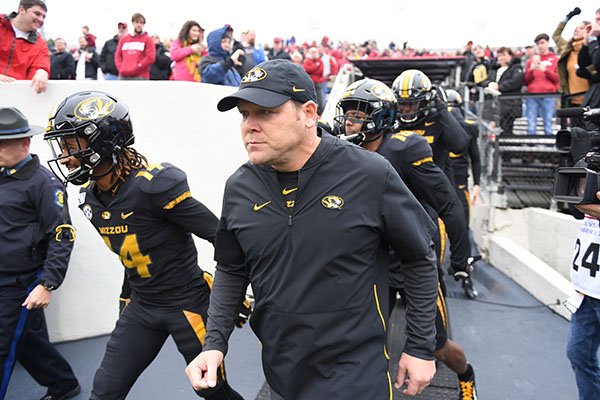 Maybe now this annual Arkansas-Missouri football game the day after Thanksgiving can start moving toward being ArMogeddon.

I am fully aware that it is called the Battle Line Rivalry, but I’ve never liked that name, and it’s not really been a rivalry anyway.

Missouri won this season with five Arkansas high school stars that did not get the chance to play for the home team — including former Fayetteville quarterback Taylor Powell throwing to former Purple Bulldog receiver Barrett Bannister — and one Razorback turned Tiger in Jonathan Nance.

We can add into the mix that former Missouri head coach Barry Odom is now the Arkansas defensive coordinator and Brad Davis is now coaching the Razorbacks’ offensive line instead of the Tigers.

Those were key pickups by new Arkansas head coach Sam Pittman, who seems to have hit a home run with the hires of Odom and new offensive coordinator Kendal Briles.

Missouri’s new head coach is Eli Drinkwitz, who spent time in Alma and Springdale before heading off to college to coach with one Gus Malzahn, certainly a polarizing figure in these parts.

Johnson arrived for his signing ceremony dressed in Missouri gear, only to take off his jacket and slam his hat to the floor in a dramatic flip to Arkansas that no doubt upset a few Tiger faithful.

According to a Johnson confidant, the player was not happy with Drinkwitz telling others he was going to be a linebacker while telling the player himself that he was recruiting him as a running back.

“Most of it was about how Coach Odom and I had a good relationship, and I knew that Arkansas would be a good place for me just because of Coach Odom. It made me feel comfortable even though I have never been to campus.”

Johnson already has next year’s game circled on his calendar.

“I will be real excited about that game,” Johnson said. “The players that I met at Missouri can’t wait for that game, and I can’t wait either. With the coaching changes going on, I am sure that is going to take it up a notch.”

Johnson and Curry are two of the nine early signees that Pittman was able to land last week with four of them being defensive players that are able to enroll early.

Dudley E. Dawson can be reached at ddawson@nwadg.com .