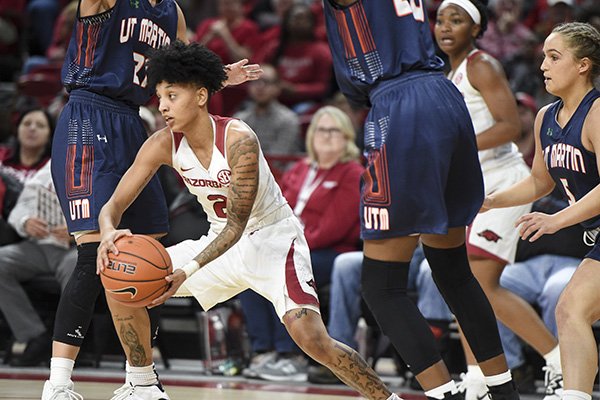 Arkansas guard Alexis Tolefree (2) drives the ball down the court, Sunday, Dec. 29, 2019, during a basketball game against Tennessee-Martin at Bud Walton Arena in Fayetteville.

FAYETTEVILLE — Alexis Tolefree hit six 3-pointers and scored 23 points to lead No. 20 Arkansas on a 96-46 win over Tennessee-Martin on Sunday.

Chelsea Dungee added 16 points and A'Tyanna Gaulden 12 for the Razorbacks (12-1), who carry a seven-game winning streak into their Southeastern Conference opener against No. 11 Texas A&M on Thursday.

Dungee, who reached 1,000 points for Arkansas in her last game, opened the scoring with a 3-pointer and Arkansas never slowed down. It was 21-11 after one quarter and a 12-0 run early in the second helped push the lead to 48-26 at the half.

Tolefree had three 3-pointers in the third quarter, one she turned into a four-point play, helping build the lead to 69-37 entering the final quarter, where Arkansas put together a 20-0 run.

Chelsey Perry led the Skyhawks (4-7) with 18 points and nine rebounds.