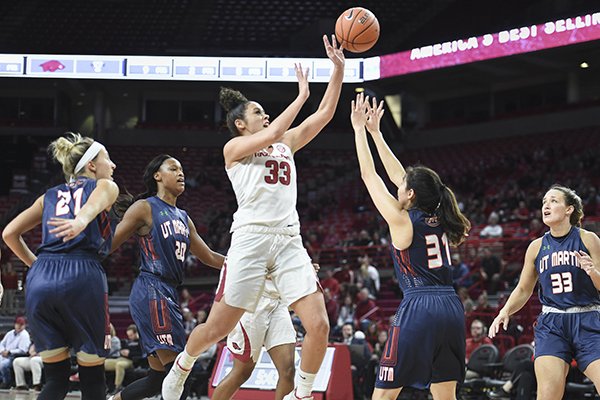 FAYETTEVILLE -- The No. 20 Arkansas women's basketball team looked primed and ready for SEC play Sunday afternoon in front of a crowd of 3,484 in Walton Arena.

The Razorbacks made nine first-half three-pointers, including four in a row, to take control and post a 96-46 victory over Tennessee-Martin to conclude nonconference play.

The Razorbacks showed few signs of more than a week off for the Christmas holiday or looking ahead to Texas A&M. Arkansas dominated the Skyhawks, who pushed then No. 6-Louisville to double overtime before losing 71-63 on Dec. 19.

Arkansas senior Alexis Tolefree led the way with a game-high 23 points, including 6-of-12 from three-point range. She said the team was definitely ready to play against the Skyhawks.

"We came out, we had a lot of focus and played with a lot of heart," Tolefree said. "We didn't look past them at all."

Arkansas made 9 of 17 from three-point range to start the game and finished with 13 three-pointers en route to a 48-26 halftime lead.

The Razorbacks even surprised their coach a little bit.

"We'll try to figure out what happened so we can duplicate it in the future because we've never been good at it. Some of our worst games have been the holiday games. I think the credit goes to the kids though."

Arkansas committed four turnovers in its first four possessions but got going late in the first quarter and took control.

The Razorbacks opened up a 20-point lead, going on an 18-2 spurt which started late in the first quarter and ended on Chelsea Dungee's three-pointer with 7:10 left in the first half for a 33-13 advantage.

The Skyhawks made a small surge before the Razorbacks pushed the lead further out on a 15-3 run for a 48-22 lead with 2:37 left in the first half. Arkansas hit four consecutive three-pointers in that flurry as Amber Ramirez went back-to-back.

Tolefree's 23 points led four Razorbacks. Dungee added 16 points, while Ramirez chipped in 14. A'Tyanna Gaulden had 12 from off the bench.

Arkansas also took advantage of 14 first-half turnovers by UT-Martin and turned them into 22 points. The Razorbacks also enjoyed a big advantage at the free-throw line, making 11 of 16 while the Skyhawks did not attempt a foul shot in the first half.

Those numbers ballooned to 36 points off 26 UT-Martin turnovers and a 27-4 advantage on made free throws for the game.

The Razorbacks are more confident heading into SEC play this season, Tolefree said.