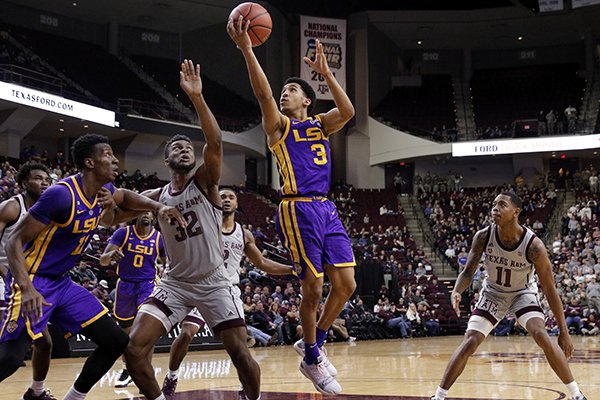 Around 4:30 tomorrow afternoon, in the Pete Maravich Assembly Center, the least attractive basketball facility in the Southeastern Conference (especially one that’s named after such a great player) the University of Arkansas Razorbacks and LSU Tigers will be warming up.

What the exact approach to Tremont Waters should be isn’t known, but ignoring him is not a good idea.

Waters, who is listed at 5-11 but is probably 5-9 at the most, has owned the Razorbacks since he came to LSU last season.

Before Waters, the Razorbacks had a four-game winning streak. With Waters, LSU is 3-0 against the Hogs, having twice beat them in Bud Walton.

In three games Waters has 52 points and 30 assists.

He has zigged, zagged and ripped through the Razorbacks defense like it didn’t exist, although he had nine turnovers in their overtime win this season. But obviously they didn’t make that much difference, LSU still won 94-88.

The sophomore is quicker than a grasshopper on a hot greased skillet. He’s Houdini in sneakers.

He’s currently the Tigers leading scorer averaging 15.3 points per game and has 119 assists and 60 steals. Tuesday night he scored 36 to lead LSU to a 72-57 win over Texas A&M in College Station.

LSU was not supposed to be this good this fast, but they are.

On a sidenote, most basketball writers turned an eyebrow up when Hunter Yurachek gave Kelvin Sampson a chance to return to college basketball. Sampson had NCAA problems at Oklahoma and Indiana — he couldn’t stay off his phone — but sat out the five-year ban by the NCAA by working in the NBA. After a 13-19 first year he’s won more than 20 games the last four seasons.

Anyway, LSU has jumped from worst to first, tied with Tennessee, in two seasons and a big part of that has been Waters.

As usual, he’ll be the smallest guy on the court, but he’ll play like the biggest and Arkansas has to find a way to get a handle on him other than fouling him.

Maybe they could try the nice-guy approach and tell him how great he is and how they think he’ll be a lottery pick next year. No need to add they wish it was this year.

Or maybe they could trash talk him about how they are going to shut him down with freshmen, but then that might make him mad. If he’s just a little better mad then that could be disastrous for the Razorbacks.

Most see tomorrow’s game as a showdown of big men. In their first meeting 6-10 freshman Naz Reid scored 27 and had 7 rebounds while Daniel Gafford had 32 and 7, and no doubt they are a big part of the offense for both teams.

The difference is Waters destroys defenses with his ability to handle the ball at full speed while making cuts and spin moves.

Waters and LSU are a huge challenge for the Hogs. The Tigers are playing for a championship and the Hogs are playing to get on a much needed run.

Stopping Waters, or at least slowing him, increases their chances of winning.