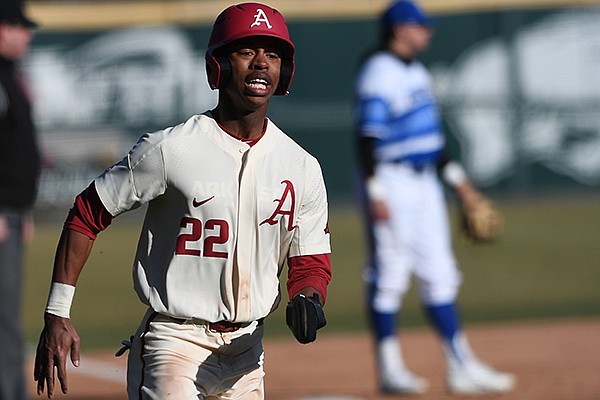 FAYETTEVILLE — Curtis Washington Jr. was brought into Sunday's game to contribute to an insurance run, but he stayed in to provide the winning run.

Washington, a freshman from West Memphis, led off the bottom of the ninth inning with a single and scored on a one-out RBI single by Heston Kjerstad to give No. 12 Arkansas a 3-2 win over Eastern Illinois at Baum-Walker Stadium.

The Razorbacks swept the weekend series against the Panthers, who made things interesting by tying the game 2-2 with two runs in the top of the eighth inning.

After pinch hitting for designated hitter Jordan McFarland in the seventh, Washington's single came on a 0-2 pitch from right-hander Blake Malatestinic.

Washington watched a fastball and a curveball go by in the first two offerings from the EIU sophomore. On the third pitch, he was waiting on a curveball and got it, and lined it into center field.

"Coach can call my name at any time, so I feel like I've got to be ready at all times," Washington said. "I was ready when the moment came and got the job done.

"I knew I was a good leadoff hitter in innings and I wanted to give my team any chance to win the game."

Arkansas coach Dave Van Horn said there was some thought to pinch hitting for Washington, who played sparingly in the Razorbacks' doubleheader sweep Saturday and had not recorded a hit prior to Sunday's ninth inning. There were a number of potential hitters still on the bench, including catcher Zack Plunkett, who had two hits in Saturday's nightcap.

"Our thinking with Curtis - and we've watched him play a lot - is that he just competes and he's not scared," Van Horn said. "...I'm proud of him for handling the situation and competing."

Washington entered in a 1-0 game after Jack Kenley walked to lead off the bottom of the seventh inning. Washington, a better bunter than McFarland, was called on to put down a sacrifice that would move Kenley into scoring position.

He chased the first pitch out of the zone and popped it off the screen behind home plate. Then he became patient and took four straight balls from EIU right-hander Carson Haws, who wouldn't come over the plate and give up the sacrifice.

"He did a nice job of not bunting at balls," Van Horn said. "That was outstanding."

Kenley moved to second and scored on a sacrifice bunt RBI by Casey Martin, who pushed the ball between the pitcher and first baseman.

As promised in the preseason, the Razorbacks played a lot of small ball in a tight game. Kenley and Washington advanced in the seventh on a two-strike bunt by Jacob Nesbit, and Nebsit bunted Washington over again in the ninth.

"Yesterday he had trouble getting the bunt down," Washington said of Nesbit. "This morning in early hitting he said he was going to work on his bunting. He did that and it showed up in the game."

Washington was stranded at third base when Kjerstad struck out to end the seventh, but EIU wasn't as fortunate the next time Kjerstad came to the plate with Washington in scoring position in the ninth. He took a ball from Malatestinic, then pulled a 1-0 fastball into right field to win.

It was Kjerstad's only hit and second career game winner. Malatestinic intentionally walked Martin to get to Kjerstad, who finished the game 1-for-5.

"I was excited to go up and get another at-bat," Kjerstad said, "and get a chance to get a runner across the board to win it for us."