State of the Hogs: Lefty Wicklander shines in debut 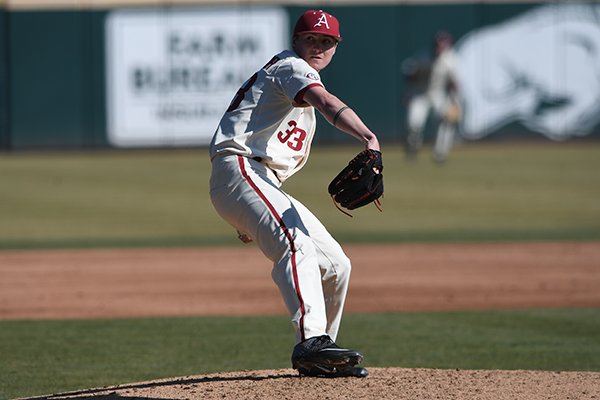 Arkansas pitcher Patrick Wicklander throws during a game against Eastern Illinois on Sunday, Feb. 17, 2019, in Fayetteville.

FAYETTEVILLE — Heston Kjerstad's walk-off single to give Arkansas a 3-2 victory and a series sweep of Eastern Illinois makes for an easy lead, but that's for someone who may not realize the value of lefty pitching.

There are few times when there are enough southpaws at the collegiate level. The best coming out of high school are grabbed and signed by professional baseball.

One of the fall camp highlights at Arkansas was the strong showing by freshman Patrick Wicklander, a 6-3, 175-pound lefty from San Jose, Calif.

It wasn't exactly a surprise. Wicklander was a star throughout his high school career with 350 strikeouts. But it's still rare for any freshmen to locate more than one or two pitches. Wicklander came to school with three, including a live fastball.

Over the last four months when Arkansas coach Dave Van Horn was asked for hints at a weekend starting rotation, Wicklander's name was there. But that was until some iffy outings in January and February scrimmages.

Fast forward to the end of the first series of the season, Wicklander wasn't in the starting rotation, but not among the first eight called to the mound.

Simply put, it was worth the wait.

Wicklander took over in the sixth inning in Sunday's series finale. There have been few with a better debut inning.

EIU sent its two-three-four hitters to the plate against Wicklander and all went down quickly. In fact, quickly probably doesn't do it justice.

Wicklander threw only 10 pitches to Jimmy Govern, Hunter Morris and Ryan Knerschield, and the only ball was a two-strike breaking pitch buried in the dirt to Govern.

As fast as catcher Casey Opitz returned the ball to Wicklander, he was set and ready with the glove and ball in front of his face.

“He doesn't juke around, does he?” Van Horn said. “He gets the ball and he's ready to go. That's what I like about him.”

There was more to like. The only hit Wicklander allowed was a sinking liner to left field that Matt Goodheart charged, but couldn't stab. It scooted under him for a double and ended Wicklander's day after 31 pitches, including 22 for strikes.

“He threw extremely well,” Van Horn said, noting Wicklander might be a starter before the Hogs get to SEC play.

“He might start this week at Southern Cal, or we may wait until the midweek game (against Memphis on Feb. 27),” Van Horn said. “We thought coming back in the spring he might be a weekend starter then he got off to a slow start.”

Wicklander's velocity had been in the high 80s so far this spring, but there was more in the tank with a game on the line.

“He had good stuff and very good velocity,” Van Horn said. “That was nice to see.”

“That's probably right, too,” he said. “You see low pitches read high, but I don't think it was off on his pitches.”

They danced across the plate, sometimes jamming the right-handed hitters. Knerschield tried to get his bat off his shoulder on an 0-2 count, but couldn't make a full swing on strike three.

Wicklander said his focus was not to “let the atmosphere get to me.” There were no issues after hitting his spots with all three pitches in the bullpen.

“I just wanted to get out there and get three outs as fast as I could,” he said. “I like to keep my own tempo.”

The one hit allowed did come around to score in the eighth when relievers Zebulon Vermillion and Matt Cronin both gave up hits.

Cronin, the more celebrated lefty on the staff, blew his second straight save, going back to Game 2 of last season's College World Series. He did get the victory when the Hogs rallied in the bottom of the ninth.

“Matt came in to face their better hitters,” Van Horn said. “He stuff was good, but he left one pitch in over the plate and that guy has a short stroke.”

Cronin was routinely hitting 95 on the radar gun, but he's still not pulling the trigger on a curveball that has been advertised as big league.

The Hogs begin their USC series on Thursday. Van Horn said that was not the original plan.

“We had to move it up because we couldn't get back on Sunday night,” he said. “We are going to miss too many Mondays (because of SEC travel).”

That means No. 1 starter Isaiah Campbell won't pitch in the opener after the Hogs had to start the EIU series on Saturday because of bad weather on Friday.

“Isaiah will pitch on Friday,” Van Horn said. “I don't know who is going to start right that first game, but it will probably be someone who just goes two innings and we just go onto the next guy.”

Wicklander was the “next guy” Sunday and was as good as advertised.