Scroggins to get Game 1 start at USC 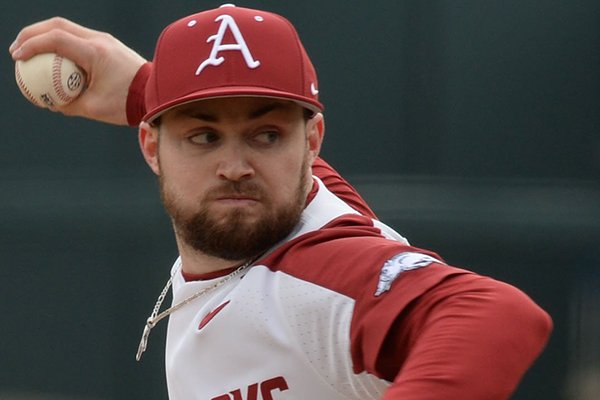 Arkansas reliever Cody Scroggins delivers to the plate against Eastern Illinois Saturday, Feb. 16, 2019, during the sixth inning at Baum-Walker Stadium in Fayetteville.

The game is scheduled to begin at 9 p.m., Central.

Scroggins, a redshirt junior, is opening the first game of the series because of a weather postponement last week that caused Arkansas' season opener against Eastern Illinois to be delayed by a day. Isaiah Campbell, the Razorbacks' No. 1 starter, will pitch Friday on six days of rest and Connor Noland will start the series finale Saturday on seven days of rest.

"(Scroggins) is a guy that we thought we could start a little bit and use him long, or we could use him at the end of the game," Arkansas coach Dave Van Horn said. "We figure we're going to use three different pitchers in the game Thursday, so we're going to give him a start."

Scroggins pitched one inning in Arkansas' opener against EIU and allowed a run on two hits and a walk. He was not sent back for the following inning, however, because he complained of arm stiffness between innings.

"Maybe he just tweaked it, scared himself a little bit," Van Horn said of Scroggins' early exit in the opener. "It's early and a lot of times this happens, but he's good to go."

Scroggins had Tommy John surgery in 2017 after injuring his elbow in an early-season game at Louisiana Tech.

In 24 career appearances, Scroggins has pitched 22 1/3 innings and has a career ERA of 4.84. The Bentonville native began his Arkansas career as an infielder before converting to pitcher late in the 2016 season.

USC (2-1) has not yet announced its pitching rotation for the weekend. During a three-game series against Nebraska-Omaha, the Trojans started sophomore right-hander Kyle Hurt on Friday, sophomore left-hander John Beller on Saturday and freshman right-hander Chandler Champlain on Sunday.

The No. 12 Razorbacks are 3-0 following a weekend sweep of EIU that included wins of 15-7, 12-3 and 3-2. Arkansas won two of three games against USC last year in Fayetteville.