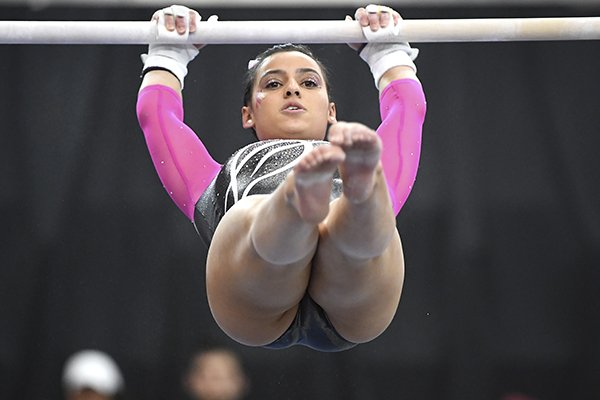 FAYETTEVILLE -- University of Arkansas gymnastics Coach Mark Cook would like to see his team build momentum as the No. 21 Razorbacks head down the home stretch of their typically brutal SEC schedule.

The Razorbacks will need momentum and more to have a shot at knocking off No. 5 LSU at 7:15 p.m. at Barnhill Arena in Fayetteville in a meet titled "Pack the Barn" that will be broadcast live on the SEC Network.

All of Arkansas’ success against LSU came during a four-year span between 2009 and 2012. … The Razorbacks were 5-1-1 against LSU in that stretch, starting with a 196.475 to 196.375 victory in the Super Six in Lincoln, Neb., on April 17, 2009. … LSU won the first 17 meets and the last 15 meets against Arkansas. … Announcers for the SEC Network coverage will be John Roethlisberger and Alicia Sacramone Quinn. … This is the final week team rankings will be determined by season average scores. Monday’s rankings will be based on regional qualifying scores. … LSU has been ranked in the top 5 for 35 consecutive weeks. … The Tigers have won 15 consecutive meets vs. Arkansas, dating to a 197.225 to 196.325 dual-meet victory by the Razorbacks on Jan. 20, 2012, at Barnhill Arena.

Arkansas (1-8, 0-5 SEC) had two falls on the bars in a loss at Auburn last week which prevented its season-high team score of 196.175 from being even better.

"We need to hit a clean meet," Cook said. "We don't care about the scores. We can't control the judges. We have not had very many clean meets this year. When I say clean, we've only had one meet where we didn't count a couple of major execution errors or falls. So we need to not count any major errors or falls, and if we do that our score is going to reflect that."

The Tigers have been less consistent than in recent years. LSU is 1-2 in SEC road meets, with losses at Auburn and Kentucky in which its scoring average was 196.15. The Tigers also posted a muscular 197.45 in a road victory at No. 9 Alabama on Jan. 25.

"I think they had a few injuries they were dealing with and I think they're up to full form now," Cook said. "We'll see how they perform. If they have a hiccup and we rock we can still knock them off."

The Razorbacks will likely send junior Jessica Yamzon and freshman Kennedy Hambrick up on all four events. Sophomore Sarah Shaffer, who returned last week from a concussion, is scheduled for at least three events and is a possibility on the balance beam.

Arkansas' top-ranked specialists remain sophomore Sophia Carter and senior Sydney McGlone. Carter is ranked 13th on the floor exercise with an average score of 9.904, five titles in seven meets and five scores of 9.9 or better on the event. She is also expected to compete on the uneven bars and the balance beam.

McGlone is No. 27 on the vault with a season average of 9.854. She will also compete on the floor, which is tied with the vault as Arkansas' top event. The Razorbacks rank 13th on both.

LSU is in the top six on all four apparatus, with a high of No. 4 on the balance beam.

Cook said the coverage by the SEC Network is good for exposure.

"It's an opportunity for us to do well in front of our audience and recruits and fans in general," Cook said.