Morris: T.J. Hammonds not on the team 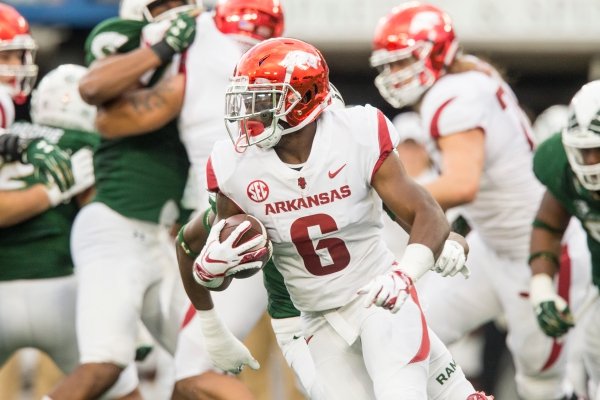 FAYETTEVILLE — Running back T.J. Hammonds is not with the team as Arkansas' spring practice is set to begin Friday, Chad Morris said Monday.

Hammonds played in four games in 2018, finishing his junior season with 28 rushing yards on 10 carries as well as four catches for 84 yards and a touchdown. He did not play following the Razorbacks' loss to Texas A&M in September in which he totaled six yards rushing on three carries.

Hammonds had 355 rushing yards and 2 touchdowns on 47 carries as a freshman and sophomore, and had 64 receiving yards and a touchdown on 2 receptions.

Hammonds' absence puts Arkansas down two running backs entering the spring. Rakeem Boyd, who led the Razorbacks with 734 rushing yards last season, will not participate in spring drills as he continues to recover from November shoulder surgery.

"I think he is hitting that really hard," Traylor added. "It's unfortunate for Rakeem because he's the one that really needs spring ball. Nothing against him at all because he had a great year, it's just the small things in the spring you really get addressed."

With Hammonds not on the team and Boyd out, this spring will be an opportunity for Chase Hayden and Devwah Whaley to step to the forefront of the group, Morris said. The two combined to rush for 767 yards and three touchdowns last fall.

Jordon Curtis, who was listed as a cornerback last season, will also move to running back, a position he played at Jenks High School in Oklahoma.