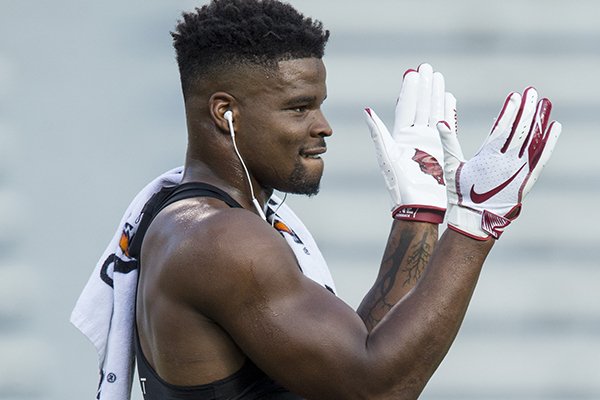 Arkansas linebacker Dre Greenlaw claps during warmups prior to a game against Auburn on Saturday, Sept. 22, 2018, in Auburn, Ala.

FAYETTEVILLE -- Former University of Arkansas standout Dre Greenlaw wants to be in top running form at the NFL Scouting Combine in Indianapolis this week.

The four-year starting linebacker from Fayetteville High has been training at the Michael Johnson Performance Center in McKinney, Texas, to prepare for the work.

WHEN On-field testing Friday through Monday

NOTES The SEC has a league-high 90 players invited to the combine, including ex-Razorbacks Hjalte Froholdt, Dre Greenlaw, Ryan Pulley and Armon Watts

"The most important thing about the combine really is the 40 [yard dash]," Greenlaw said. "So I've definitely been working on that and working on technique. That's what it's all about."

Greenlaw is among four former Razorbacks invited to the combine, joining offensive lineman Hjalte Froholdt, defensive lineman Armon Watts and cornerback Ryan Pulley. The event began Tuesday and will continue through Monday at Lucas Oil Stadium. It will feature a conference-high 90 players from the SEC.

Froholdt's group reported on Tuesday along with running backs and specialists. Those groups will have orientation, medical exams, interviews and psychological testing for two days and then their on-field work will take place on Friday. Froholdt, who has a draft grade of 5.37 by NFL.com, will be OL18 during his time in Indianapolis.

Watts has the top draft grade among the Razorbacks at 5.72 by NFL.com. The 5.50 to 5.99 range is described as "chance to become an NFL starter." Froholdt and the other Razorbacks are in the 5.20 to 5.49 range, which is "NFL backup or special teams potential."

Greenlaw, with a draft grade of 5.20, will be LB18 at the event. He and Watts, DL17 at the combine, will conduct on-field workouts on Sunday.

Pulley, who is DB29 with a draft grade of 5.31, arrives with the final group on Friday and goes through on-field drills on Monday.

Greenlaw got a taste of the next level at the Senior Bowl last month, where he made the tackle on the opening kickoff, played on the second unit for the Los Angeles Raider's North team, and underwent a rigorous interview schedule.

"I got some good experience and got around a lot of coaches and was able to kind of showcase my talent a little bit," Greenlaw said. "They were able to see me move around and make some plays. I felt confident and good about it."

Greenlaw said he's trying to stay level-headed during the process.

"I'm just trying to be patient and stick to the grind," he said. "This time can be a little stressful because you don't know what's going to happen or where exactly you're going to end up or how it's all going to work out."

The week at the Senior Bowl helped in that regard.

"You're just staying up all night and doing interviews and waking up early in the morning to weigh in and do medical checks and whatever it is they have us doing," Greenlaw said.

"But I've heard [the combine] is a very stressful environment. It's kind of their idea of putting you under stress and seeing if you can perform at the same time. They want to see how you react to it. I'm thankful to be given this opportunity. It's a once-in-a-lifetime opportunity, so I'm just grateful to be there."