Free from Denz, Hogs score away 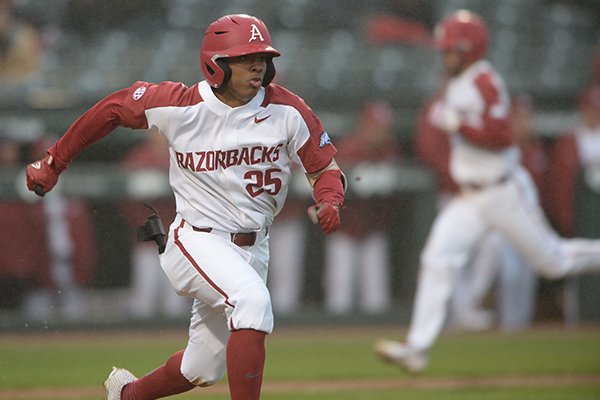 FAYETTEVILLE -- Memphis left-hander Danny Denz dazzled No. 12 University of Arkansas for most of five innings on a chilly, drizzly Wednesday afternoon in Northwest Arkansas.

But after the 5-9 Denz reached the end of his day in the fifth, things went haywire for the Tigers.

Arkansas left-handed freshmen Caden Monke and Evan Taylor both struck out the side in making their college debuts in the sixth and eighth innings, respectively. … Trevor Ezell’s stolen bases in the third and fifth innings made him 6 for 6 on the year. … Arkansas catchers Zack Plunkett (1 of 2) and Casey Opitz (2 of 2) have thrown out 3 of 4 attempted base stealers. … Memphis pinch hitter Nick Jones saw one pitch in the game and crushed it over the left-field wall against lefty reliever Liam Henry in the ninth to set the final score.

Arkansas scored seven two-out runs in the fifth inning, circling the bases on walks, stolen bases, an error, and a pair of two-run singles to notch a 10-3 victory before a crowd of 1,175 at Baum-Walker Stadium.

The Razorbacks (6-1) improved to 4-0 at home and extended their winning streak over Memphis (2-5) to six games.

Arkansas scored eight of its runs with two outs and played error-free in the cold, slick conditions. The Razorbacks also stole five bases to bump their season total to 20.

"I think it bothered them," Arkansas Coach Dave Van Horn said about the Razorbacks' speed. "They were real concerned about us running. We took advantage of some guys that weren't real quick to the plate.

"We kept getting runners in scoring position, and I think the speed definitely bothered them and probably led to an error or two."

Trevor Ezell had 3 hits, reached base 4 times and drove in a run while improving his batting average to .423. Casey Martin went 1 for 3 and scored 3 runs, and Trey Harris and Christian Franklin drew two walks each for the Razorbacks.

"Basically, I decided since I didn't get it done the first time that it was about time that I get a ball through," Kenley said. "Thank goodness it got through the pitcher's legs. It was a big momentum shift in the game."

Kenley said he came to the plate with the idea of being as aggressive as possible.

"With runners in scoring position, get on the first pitch I can really hit, and I was fortunate enough to get a good pitch and be able to find a hole," he said.

"Whenever they called my name, I just got ready and did my best to slow the game down and throw strikes and do the best I can to let our offense work and get the lead back," Vermillion said.

Denz (0-1) battled through trouble in the first inning, when he gave up a single run, and held the Hogs hitless for three consecutive innings.

"He kept running it away from us, and then he'd throw the change-up," Van Horn said. "He kept everything down. He did a nice job. I don't know. Our guys felt like they were on him, and then they pulled off just a little bit."

Ezell laced a one-out single in the fifth. Denz struck out Dominic Fletcher, then walked Harris to end his night.

Pinch-hitter Casey Opitz drew a walk against Walker Brockhouse, and then the roof collapsed on the right-hander.

Kenley followed with his go-ahead single, and he scampered to first on an errant pick-off throw. After Jacob Nesbit drew a walk and stole second, Franklin hit a trickler to second base and beat the throw for a two-run single as Nesbit raced around from second base.

Martin's squibber to first base appeared to end the inning with the Hogs up 6-2, but the ball hit the bag and caromed far enough for the speedy Martin to reach base. Heston Kjerstad followed with a two-run single to complete the surge.

"However many runs you can tack on with two outs, that really kind of shut their dugout down," Ezell said. "You give up seven runs in the middle of the game when they've been in it the whole time, it's tough to come back from that."

Arkansas tacked on two more runs in the seventh on Nesbit's sacrifice fly and Ezell's single up the middle.

Arkansas broke on top 1-0 in the first, but the Razorbacks failed to take full advantage of Denz's lack of control. Denz fell behind all but one of seven batters in the inning and had three-ball counts on three hitters, leading to two walks.

Martin led off with an eight-pitch walk, and the shortstop stole second after Kjerstad's strikeout. Ezell reached on an infield single, then Fletcher slapped an RBI single the opposite way through the left side of the infield to score Martin.

Harris walked to load the bases with one out. Denz wriggled out of the jam by inducing a pop-up from Zack Plunkett and a ground out from Kenley.

The lead didn't last long. Memphis outfielder Nick Vaage hit a one-out single in the top of the second and scored when catcher Jason Santana stroked a Wicklander fastball well over the left-field wall for a 2-1 Memphis lead.