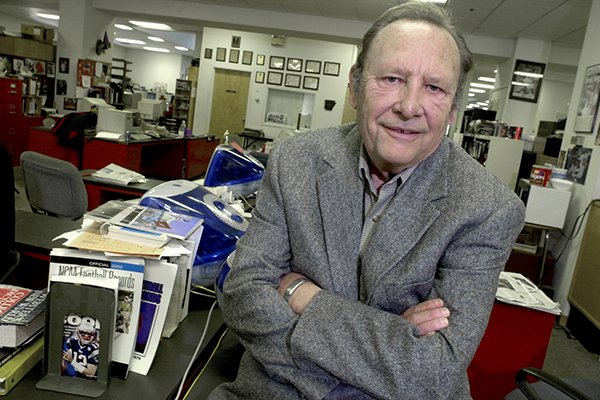 Jim Bailey is shown in the Arkansas Democrat-Gazette newsroom in Little Rock in this January 2003 file photo. Bailey, who covered sports in Arkansas for than a half century and was voted state sports writer of the year 18 times, died on Jan. 2, 2019, due to complications from Alzheimer's.

The plan was to rise early Friday, drive to Little Rock and then join a group of old friends at the bedside of Jim Bailey.

Harry King, Wadie Moore, James Thompson and Donna Lampkin Stephens have been there regularly over the last four or five years. I've met them several times.

Instead, that same group will be in a larger gathering at the visitation Friday night. Jim, our mentor and great friend, passed away Wednesday night at age 86.

I'm sure the same rich stories will be told again. They will be about the old days at the Arkansas Gazette on the staff of Orville Henry, the late sports editor and my father. Some of the stories are now legend, about a legend, Jim Bailey.

Jim was like family. He was like the best uncle ever, both as a person or mentor. I owe him a great debt. I say that, just as my father did as soon as Jim began on his staff in 1956.

Most assume my training came from my father. It really came more from watching Jim, the best example of a journalist from our state.

They co-wrote the book The Razorbacks, which was first published in 1973 and updated in 1996. I have the manuscript now, waiting on a surge from the football team that would warrant another update.

I had this discussion several times with my father about the work from the book — Who did what?

And, if you knew both Jim and my father, you'll find this appropriate: My dad wrote long; Jim was tight and, well, perfect, in his work. There was never a wasted keystroke. He painted a beautiful picture with concise words.

“The chapters Jim wrote are the ones that didn't need an edit,” my father said.

For the record, Jim wrote the first half, my dad the second.

Those two loved each other. The respect and trust for the other and their work was huge.

There would be some subtle, dry jokes. They would sometimes pop on trips back and forth to cover Razorback football.

Jim loved to eat. On a car trip to Dallas for the Cotton Bowl, I was in the back seat with Jim in the family station wagon. Jim reminded my dad we would need to stop for lunch and Arkadelphia would be a good option. A cafe was mentioned.

My father translated: “Jim means, it's all you can eat. And Jim will win.”

Jim knew all of the right places in AIC towns like Arkadelphia. It was one of the many beats that he covered wonderfully for the Gazette. The Travelers and the boxing scene were among the others.

The bowl trips were made by car, but the regular-season games to Texas for the Southwest Conference games were on a chartered plane, usually an Aztec with six or seven seats. I'd end up on the bench seat in the back beside Jim.

My father was often in the co-pilot's seat. Among his favorite things was to announce the name of a town when lights appeared on the horizon.

One night, right after my father pointed to the right at Longview, then Shreveport, then Texarkana, Jim put his arm around me and pointed out the little portal in the back of the plane to one dim light in the same direction.

Indeed. Like that night in the plane, Jim could say with one word what took others many sentences.

My first byline was courtesy of Jim, literally.

At age 18, Thompson, the Gazette's assistant sports editor, sent me to cover Little Rock Central-Hall in basketball. It was a Tuesday night. I hung around a little too long after the game to get quotes from way too many coaches and players, and by the time I rolled into the sports department it was near deadline.

I plopped down at a typewriter with stats, quotes and notes spread out. I sat there for too long with blank paper.

Jim tapped me on the shoulder and I popped up. He asked me about my notes, then typed a story in what seemed like five minutes. It quickly went to the back shop and I was sent home.

The next morning I grabbed breakfast without being able to get the paper away from my father. He just said, “Good story this morning. Your first byline is well done.” I didn't explain or get to read what I didn't write. That was a serious mistake.

I walked into my first-hour class, senior English. On the blackboard was a word I'd never seen.

My teacher, a stoic older lady, said, “Mr. Henry, your work today in the paper is quite a bit better than the work that you regularly hand me. Tell us the meaning of this word in your first sentence.”

I've heard other similar tales about young reporters who were bailed out by Jim on an early story, perhaps when they dictated to him from a pay phone at a stadium. Always the product was described as their best work ever.

A few years later when I spent my first day at the Tulsa World in the home of sports editor Bill Connors, I apologized in advance because I wasn't of the same quality as those he knew from the Arkansas Gazette. He said, “I know your father well, but I spoke to Jim Bailey before I called you for an interview. I knew he probably is the one who trained you.”

I told Bill the story about my first byline. He gave me credit for getting up and letting Jim take over at the typewriter.

Never was it said better. No editing necessary.