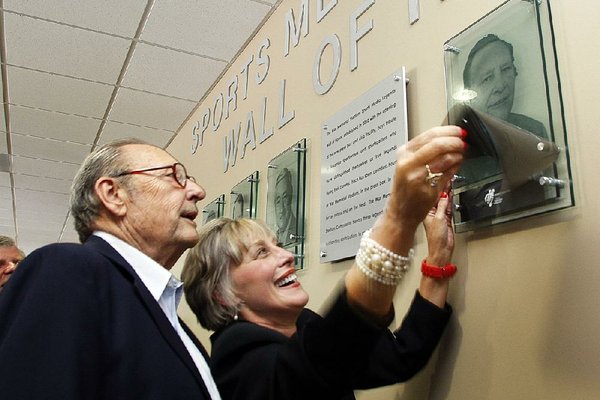 Jim Bailey, a longtime sports writer for the Arkansas Gazette and the Arkansas Democrat-Gazette, died Wednesday night after a battle with Alzheimer's disease.

Bailey's son Bob Bailey said his father died at 6:15 p.m. at his home in Little Rock. Bailey had suffered from Alzheimer's since 2008, his son said.

Bailey covered the Arkansas Intercollegiate Conference, the Arkansas Travelers and boxing for the Gazette from 1956 until the newspaper's closing in 1991. He then worked for the Arkansas Times and the Democrat-Gazette before retiring in 2013.

"There was never an ego with Jim," said Harry King, who covered sports for the Gazette, The Associated Press and Stephens Media. "He never had an ego."

Bailey also covered the Arkansas Razorbacks and St. Louis Cardinals for the Gazette.

"Writing was such a joy for him since he started at the Gazette in '56," Bob Bailey said. "I enjoyed reading his writing. I've been reading his books."

King, who began his sports writing career at the Gazette, called Bailey a professional.

"Just watching him, if you couldn't learn how to do things the right way, you weren't paying attention," King said.

In 2003, Bailey was inducted into the Arkansas Sports Hall of Fame. He was voted the Arkansas National Sportscasters and Sportswriters Association Sportswriter of the Year 18 times and earned multiple Associated Press awards during his career.

The Travelers named the press box at Dickey-Stephens Park in North Little Rock for Bailey and sports announcer Jim Elder in 2007, which is known as the "Jim Box".

In addition to his newspaper work, Bailey co-wrote The Razorbacks, a story of the University of Arkansas football program, with Gazette sports editor Orville Henry in 1973 and was a co-author with longtime Arkansas football coach and athletic director Frank Broyles on his autobiography, Hog Wild: The Autobiography of Frank Broyles, in 1979. He also wrote a book on the Travelers in 1980, which was republished in 2007 as The Arkansas Travelers: 100 Years in Baseball.

King credited Bailey along with Henry for their work in the state.

"They were in a class by themselves," King said. "If [Bailey] wanted to be the sports editor at the Memphis Commercial Appeal or the Houston Chronicle or go to Sports Illustrated, he could have.

"It wasn't his deal. He liked Arkansas."

Ray Rodgers, who operates the Ray Rodgers Boxing Club and has worked as an official with the Golden Gloves and Silver Gloves associations, said Bailey had an innate love of boxing. 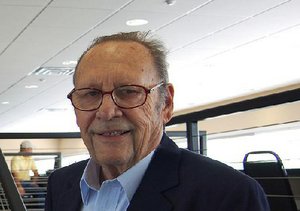 Photo by Democrat-Gazette file photo
Jim Bailey is shown in this file photo.

"He studied the art," Rodgers said. "He knew what time it was when these guys were boxing. We used to go to lunch together. The time would slip away. We would get so enthralled in the old fights mentally and verbally.

"It wasn't anything for two to three hours to slip by. The waitresses didn't like it, but that was alright."

Bob Bailey appreciated his father as more than a sports writer.

"People look at him from a sports perspective, but he was well-read in every subject," Bob Bailey said. "He loved literature. He had a fondness of history. He would constantly bring a book to me and say, 'Read this chapter.' He would always bring stuff to me. He could talk about any subject."

King recalled when he was assigned by Bailey to cover a golf tournament.

"He said to me one time, 'I know how long your golf tournament story is going to be,' " King said. "I said, 'What are you talking about?' He said it will be 18 paragraphs, one for each hole.

"His point was condense the stuff. Write about what was important. He never said condense it, but it was his point he was trying to make."

Bailey, a native of Emerson, was born Oct. 13, 1932. He graduated from Southern Arkansas University in Magnolia in 1954 and joined the Gazette in 1956.

Bailey is survived by his wife Peggy and his son Bob. Funeral arrangements were pending as of Wednesday night.