Razorbacks shoot for a quicker start 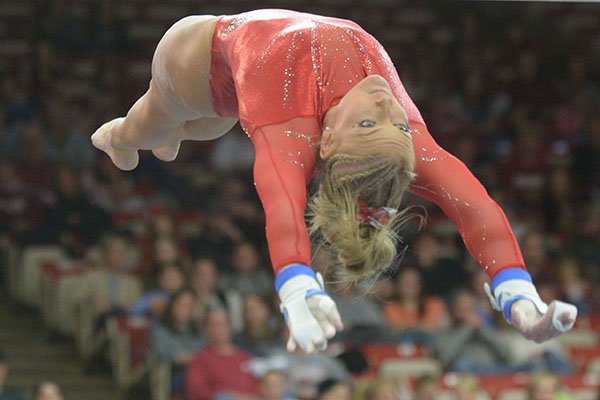 Arkansas' Sarah Shaffer competes in the bars Saturday, Jan. 5, 2019, during the Razorbacks' meet with No. 2 Oklahoma in Barnhill Arena in Fayetteville.

FAYETTEVILLE -- The No. 10 University of Arkansas gymnastics team would like to carry its success from a meet against Arizona last year into today's competition in Tucson, Ariz.

Sophia Carter, who is tied for the NCAA lead on the floor exercise after the first week of competition with a 9.95, is the first Razorback to be a national event leader since Katherine Grable was No. 1 in the all-around in 2014. … Arkansas sophomore Sarah Shaffer is the reigning SEC freshman of the year. … The Razorbacks have an 0-2 record vs. the Wildcats in Tucson.

No. 18 Arizona will be trying to avenge the dual-meet loss in nonconference action at 4 p.m. Central today at the McKale Center on the Arizona campus.

The Razorbacks got off to a slow start last week with consecutive sub-49.0 scores on the vault, uneven bars and balance beam to fall way behind Oklahoma, which posted an NCAA-record season-opening score of 198.05 and moved to No. 1 in the nation.

"We have some really good floor routines," Arkansas Coach Mark Cook said. "We have more difficulty to go on the floor. We'll make that event even better.

"We have harder vaults coming up, too. We just have to get cleaner on bars and have less wobbles on beam."

Arizona is coming off a second-place finish in a quad meet at Central Michigan with a 194.75. The Wildcats achieved eight career-high scores and tied for another, led by all-arounder Maddi Leydin, who won the meet with a 39.05.

Arkansas all-arounders Shaffer and junior Jessica Yamzon posted matching 39.15 scores against Oklahoma. Junior Michaela Burton, competing in her first all-around, had a 37.525 that was weighed down by a poor bars score (8.2) based on an issue with her grip.

Ace freshman signee Amanda Elswick will miss a second consecutive meet while rehabbing from injury. The sister of former Razorbacks standout Heather Elswick, she is expected to make her college debut within a few weeks.

The Razorbacks are competing in their first of four consecutive road meets before returning to Barnhill Arena on Feb. 8 against No. 18 Alabama.