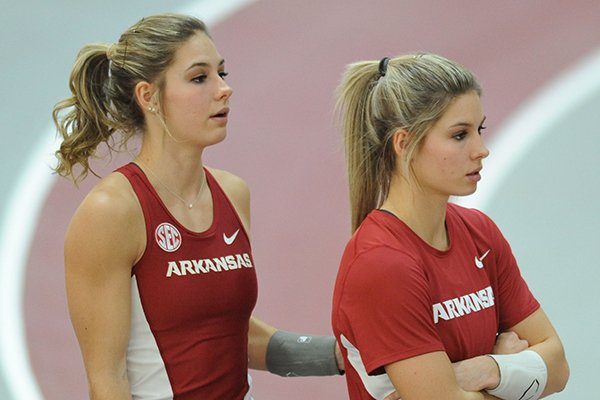 FAYETTEVILLE — University of Arkansas seniors Lexi Jacobus and Tori Hoggard finished first and second in the pole vault Friday at the Razorback Invitational held in the Randal Tyson Center.

Both of the twin sisters from Cabot cleared a best height of 14 feet, 9½ inches for the No. 1-ranked Razorbacks, but Jacobus was awarded the victory because she cleared the winning height on her second attempt and Hoggard cleared it on her third attempt. Both missed three attempts at 15-1½.

Arkansas senior Desiree Freier cleared 14-5½ to take fourth in the the pole vault, and freshman Bailey McCorkle was fifth at 13-1¾.

Kelsey Herman, an Arkansas senior from Crossett, won the pentathlon with a career-best 4,189 points. Her previous scoring high was 3,945 points.

In the women’s 200 meters, Arkansas senior Payton Chadwick, from Springdale Har-Ber, was edged out by Kentucky freshman Abby Steiner for the victory. Steiner won in 22.965 seconds with Chadwick second in 22.969.

Arkansas seniors Gabe Moore and Derek Jacobus are first and third through four of seven events in the heptathlon. Moore has 3,399 points and Jacobus has 3,105.