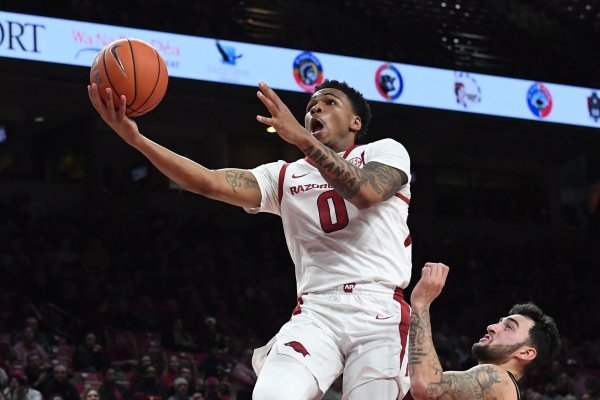 FAYETTEVILLE — Over the last five seasons, Mike Anderson's teams have made a habit of settling in during the second month of SEC play.

Anderson often hits on the fact his teams perform better and begin to "click on cylinders" in February once they gain a feel for the lay of the conference. Arkansas is 29-11 in February in that span.

He is also hopeful a pair of his reserve guards - freshmen Desi Sills and Keyshawn Embery-Simpson - follow that trend as well and can contribute on the offensive end in what will be an all-important month for the Razorbacks in terms of postseason aspirations.

The Razorbacks shot just 29.4 percent from 3-point range in league play in January, which ranks 12th in the SEC, and were 10th in offensive efficiency, scoring 98.3 points per 100 possessions. The three previous seasons, Arkansas finished no worse than second in 3-point shooting in SEC games, and Sills and Embery-Simpson could provide a lift in that area in the coming weeks.

"Let's hope so. Let's hope so," Anderson said Thursday in previewing LSU. "I think they're bringing the energy defensively and it's just a matter of confidence when you're talking about offensively."

Embery-Simpson and Sills have both proven themselves capable of big scoring nights. Embery-Simpson has reached double figures three times this season, including a team-high 16-point performance at Ole Miss in a 84-67 loss, but his jumpshot has been inconsistent for stretches as well.

He opened SEC play hitting just 1 of his first 12 shots against Texas A&M, Florida and LSU, and was 1-of-12 from distance in the team's first four conference games. Since hitting 2-of-5 threes at Ole Miss, he is 2-of-13 from the floor and 1-of-8 beyond the arc. He finished the month of January 4-of-22 from 3.

In Sills' case, he began his first run through the SEC with a bang, leading the Razorbacks with 13 first-half points in their win in College Station. He made 3-of-5 triple tries prior to halftime against the Aggies, but since then is 1-of-9 from deep and has missed 16 of 21 field goal attempts. He did not attempt a 3 in consecutive games against Tennessee, Ole Miss and Missouri.

Add in point guard Jalen Harris' 3-point figures from the first month of 2019 and the group combined to shoot 20.4 percent (11/54) from distance. Harris finished 3-of-18 beyond the arc in January, and one was the 30-plus foot heave at the first-half buzzer at Texas Tech.

"They're in position to make them," Anderson said. "They're taking open shots, they just have to knock them down or get to the free throw line."

Over the last two weeks, Arkansas has received improved play from its forwards off the bench. In various ways, Reggie Chaney and Gabe Osabuohien have provided positives at times, and in the last week junior Adrio Bailey is coming off his two best scoring nights since early December, adding at least eight points in back-to-back games for the first time since FIU and Colorado State.

"I think when those guys play, I think it makes us an even more balanced team," Anderson said. "Because a lot of people are zeroing in on the guys who shoot the basketball. They’re playing them real tight. They’re backing up off those guys, so the more effective they are, then I think it makes us ... they’ve got to pay attention to the other guys."

Now, entering a challenging road test at No. 19 LSU on Saturday and the second full month of conference play, should Anderson get a boost from his guards off the bench, Arkansas would have a chance to take shape and round into February form.

Sills and Embery-Simpson's shot-making would also alleviate a bit of the perimeter load carried by Isaiah Joe (42.6 percent from 3 this month) and Mason Jones (27.8 percent), who each attempted 54 3-pointers in January. Anderson said Joe had been under the weather in Arkansas' previous two games and would get a greater sense of his readiness for LSU at practice Thursday.

"Hopefully our guys have a sense of urgency you’ve got to play with, especially this time of the year," Anderson said.