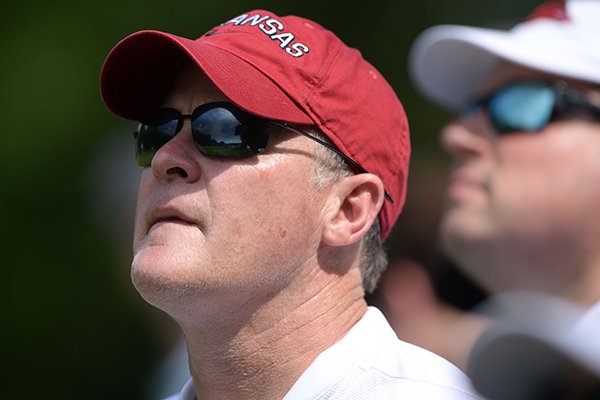 FAYETTEVILLE — Nearly 19 months into his tenure, University of Arkansas athletics director Hunter Yurachek has standardized the contracts for many of the head coaches of the Razorbacks' 19 sports programs.

Of the 11 Arkansas head coaches who were on staff when Yurachek was hired, seven have amended or new contracts with similar parameters that can extend their employment by up to two seasons and include up to two pay raises for competitive success, notably reaching the NCAA postseason in team sports. Each contract includes a cap on the maximum length of employment (not to exceed seven seasons in most cases) and total potential pay raise, which is based on the individual's salary.

Similar provisions are in the contracts of the two head coaches hired this year by Yurachek - men's basketball coach Eric Musselman and gymnastics coach Jordyn Wieber, and swimming/diving coach Neil Harper is in the process of coming to a new agreement with the athletics department, according to a department spokesperson.

"If we're going to have success, I want our coaches to be rewarded instantly for their success - to know that's part of their contract, whether it's a rollover or a bonus or whatever the case may be," Yurachek said. "Plus, I don't want to be renegotiating coaches' contracts every year. That's why there are built-in incentives for additional years, additional salary increases when we have success, because it's hard in this conference to have success.”

Van Horn, Deifel, McMakin and Taylor earned extensions by their teams making the NCAA postseason, while the contracts for Harter and Bucknam call for an extension if two of their three teams finish in the top 10 of an NCAA championship meet.

Harter's indoor and outdoor track and field teams both won NCAA championships in 2019.

"Our spring sports have just had phenomenal success since I've been here," Yurachek said, "and they were rewarded for it.”

Van Horn is in line to receive around $123,333 in total bonuses for the Razorbacks advancing to the College World Series and winning the SEC Western Division championship.

"The competitive instincts that I have, and I think my peers have as well, it's extra motivation that you're going to be rewarded," Harter said. "Not only does it give you security with multiple years, but also the incentive to rise to the challenge.

"I think (Yurachek) is definitely a coach's coach in the respect that he understands how to appeal to the competitiveness of the sport that you happen to be in.”

The latest Arkansas coach to amend his contract is soccer coach Colby Hale, who is the program's all-time wins leader and has led the Razorbacks to NCAA Tournaments in six of the past seven seasons.

Hale signed a contract extension in 2017 that runs through 2021. The amendment he signed May 28 did not extend the length of his contract, but gave him up to two automatic one-season renewals and and up to two $15,000 pay raises if the Razorbacks reach the NCAA Tournament.

Jason Belzer, a New York attorney who represents multiple college head coaches as an agent and is the publisher of the website AthleticDirectorU.com, said Yurachek's approach is unique among athletics directors.

"There are plenty of ADs on the Power Five level who will say, 'I don't want a rollover. I want to be able to have a conversation to figure out what I need to do, and I'll happily renegotiate my coaches' contracts every year if they are having great performance,'" said Belzer, who does not represent any Arkansas coaches.

"It's probably the only athletics department that I've ever heard that has that kind of uniformity when it comes to a rollover contract. A rollover is typically bargained for after an exceptional performance by a coach. A lot of times it is done by a coach who knows he or she is going to be at the university for a long time, just to make it easier not to have to renegotiate a contract on a consistent basis."

Belzer said that while automatic renewals are nice to have in a contract, they won't necessarily stop a coach from attempting to renegotiate frequently.

Football coach Chad Morris, women's basketball coach Mike Neighbors and women's tennis coach Courtney Steinbock signed agreements in 2018 that do not include rollovers, but have similar language to other UA coaches for competitive bonuses.