Familiar process: QB Hicks no stranger to rebuilding with Morris 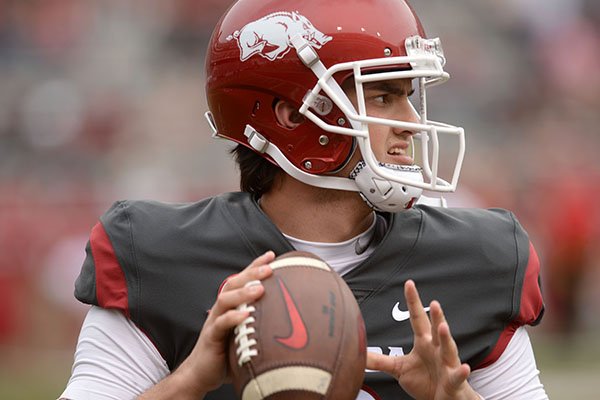 FAYETTEVILLE — Ben Hicks had options when it was clear that as a senior transfer he’d have immediate eligibility if he left SMU last winter.

The starter for most of his last three seasons at SMU, Hicks picked the rebuilding project at 2-10 Arkansas. It’s the second time the Waco, Texas, product has decided to join head coach Chad Morris and quarterbacks coach Joe Craddock after a 2-10 first year.

That’s one way to put it. Perhaps it might also be said he understands where the Hogs are headed because of the journey Hicks had with Morris and Craddock at SMU.

“I do know the process,” Hicks said. “What I also know is that I’m far more experienced now than I was then and it should be easier.”

Make sure to note that Hicks didn’t say what the Razorbacks face as they try to right the ship in the SEC West is going to be easy.

It’s also fair to note that nothing was guaranteed if he stayed at SMU. He was in and out of the starting lineup last year in what he called a “struggle” in the offense being installed by a new coaching staff.

“I was having a tough year, too,” Hicks said, comparing his struggles to those of the Hogs and his old SMU coaches.

“So I thought maybe I should come here and help them out.”

Hicks didn’t say he thought about the transfer during the season, but he did admit that he followed the Hogs. He would have never guessed they were headed for a 2-10 season as he watched.

“I thought they would beat Ole Miss,” he said. “I was pulling for them. I had no bad blood for those coaches for leaving SMU. Why wouldn’t they go to the SEC?”

Hicks was pulling for their success.

“I sent Coach Craddock some encouraging texts,” Hicks said. “I guess I knew what they were going through because the same thing had happened at SMU.

“I do remember watching the Alabama game. We were playing in Orlando that night and I was in my room watching the Hogs play. I think the other game I watched the Texas A&M game.”

There were bright spots in both of those for the Razorbacks. They had the ball with a chance to win at the end of the A&M game and had some offensive success against Alabama.

But overall, the offense struggled. Quarterback Ty Storey was inconsistent and he didn’t have much help from the offensive line or the wide receivers. If Hicks is to be more successful, those areas have to improve.

“I think we will be more solid up front,” Craddock said. “That’s going to help Ben because we faced too many third-and-longs last year. We should have better production on first and second down.”

Third-and-medium is what Hicks handled well at SMU, in part because he had reliable Trey Quinn to beat man-to-man coverage.

And, it was usually man coverage on Quinn because the opposition was double covering Courtland Sutton on the other side. Both played in the NFL last year.

Quinn caught 114 passes to lead FBS receivers in 2017. Many of his catches were to convert third down. He had a stretch of three games where he caught 17, 17 and 15 passes. No one else in major Division I football had done that.

Hicks recited the numbers and the opponents. He said they ran the same play over and over.

“We did,” Craddock said. “But it was a read route and I knew that Ben and Trey were going to make the reads to make the defense wrong.”

Houston was playing man coverage, but Cincinnati and UConn were both playing a lot of zone. It didn’t matter.

“We did see press coverage at SMU, but there is more of it in the SEC,” Craddock said. “You know what kind of corners you are going to see in this league every week, the very best.

“But it’s not like we didn’t see some press. We played TCU every year and we had some success against them, too.”

Hicks said the success with Quinn was mainly because of the work they put in over the summer.

“That’s when you build trust,” Hicks said. “I knew where Trey was going to be on every look because we’d worked so much together in our summer passing workouts. It’s trust.

“I’ve showed them all what we could so at SMU with Courtland and Trey. It looks easy and maybe it got easier after we had put in all of that work.

“I told our guys, ‘Don’t get frustrated. Just keep working.’ I will say that Mike Woods was being recruited at SMU so he saw what we did and knows it works.”

However, Hicks isn’t saying Woods is definitely “the guy” just yet. They missed time in the spring because Woods was out with a broken hand.

“I’m not saying it has to be a wide receiver to be ‘the guy’ in our system,” Hicks said. “It can be a tight end. We just need someone to step up.”

It could come from a talented cast of freshmen. Trey Knox showed flashes in the spring of stepping forward.

“He did,” Hicks said. “He’s going to be a great player. I’ve told him that I wish I was going to be here for another two years because I know what he’s going to become. It could be sooner than that but I figure his best is later because he’s a freak.

“I think he’s like Courtland, maybe a first rounder, if he does all the little things and keeps working. It just takes so much work.

“I keep telling these guys that they don’t understand how much work Trey and Courtland put in to get to the NFL. They worked so hard. You have to put in the time.”

Hicks was excited to spend a lot of time on football this spring.

“It was stuff that I could do in an hour a day, so the rest of my time was spent with football. I’ve never had so much time to study tape.

“On the days we practiced this spring, I could stay in the football offices until about 10 p.m. each night and study with the other offensive players, show them things. On the days we didn’t have practice, I might have gotten done at 6 p.m. because I could work on tape study all day.”

Hicks took three weeks away from the game after finals.

“I had kind of hit a wall for the first time,” he said. “So I am going home to spend some time in Dallas before we start summer school. I’ll see some of my SMU friends.”

But he won’t work out at SMU. He’s a “weight room junkie,” by admission. He lifted at Allen High School.

“Maybe someday I can work out at SMU,” he said. “But it’s been too soon. My high school coaches (head coach Terry Gumble and offensive coordinator Derek Alfred) are at Allen now and they invited me to come there.”

There was plenty of golf during his break.

“I enjoy golf,” he said. “It’s taught me lessons that help me in football. You hit a bad shot in golf, you better keep your emotions in check. I’ve learned to channel that type of lesson when I throw a bad pass.”

The goal is avoid the bad plays. Sometimes that’s all it takes to extend a game into the fourth quarter.

“There will be some games this year where our goal is to get the game into the fourth quarter,” Hicks said. “Maybe that means just being down seven or maybe just 14 points, just hang around against maybe some teams we aren’t supposed to beat.

“You get the game to the fourth quarter, things happen. You create some momentum and that all can translate into a pretty good season. Our goal early is to find a way to create momentum.”

“I tell our guys that all of the time,” Hicks said. “You have to work smart, but it’s about putting in time. That’s how we will figure out who we are. I don’t know if we have our identity yet.

“I think summer is when you figure it out. The coaches aren’t there and so much of what you do in the fall comes down to what you accomplished in the summer.

“That’s what I’ve been telling our guys for several weeks. They have to show me what they can do and how consistent they can be. That’s what Courtland and Trey did, prove to me that they were to be trusted.

“If they are in the right spots, I’ll get them the ball. That’s the word I keep telling them, earn trust.

“A lot of what we do is option routes. So if I know they are going to read it, then that’s how you get the ball. That’s how Trey put together that season. He understood how to use space and run those option routes.”

Then, it comes down to Craddock giving Hicks the freedom to work his magic. Those two know the drill.

“I learned so much from Coach Craddock,” Hicks said. “What’s interesting is that he coaches me a little different now.”

“Maybe, but I also think he’s different now than when he first became a coordinator,” Hicks said. “We kind of developed together. There was a time when our tempers flared. Maybe we did it to get the team fired up. He’d get after me and I’d respond.

“It was like we scuffled at times. I’m talking about mentally scuffling. I didn’t mind because I was used to being coached hard. And, sometimes he’d just let his temper go and I liked it.

“Now Coach Craddock can get after you. I haven’t felt that as much here, maybe he doesn’t need to do that with me anymore. But if he does, that’s great. He knows he can coach me hard.”

That’s why Hicks came to Arkansas, to feel the heat again from Craddock. Like he said, that’s just fine. After all, he’s a little hard headed.