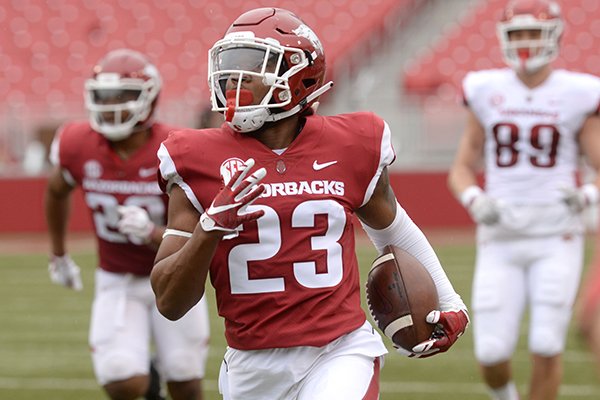 FAYETTEVILLE — Devin Bush is a young man with a plan.

A four-star cornerback and member of the ESPN 300 at No. 219, the 18-year-old enrolled early at the University of Arkansas with an eye on majoring in finance to support his vision.

“I plan on having like an empire,” Bush said in June. “We could support a lot of business: Music, real estate, have bowling alleys. Just a lot of stuff I enjoy doing and going to when I was a kid.”

Bush’s empire could get its start in Texas, he said, or maybe in his hometown of New Orleans, where he helped Edna Karr High School win three consecutive state championships.

“I’m really trying to expand all across the nation,” he said.

Devin Bush At a Glance

NOTEWORTHY ESPN 300 selection at No. 219. ... Ranked as the No. 13 player in Louisiana by ESPN and Rivals. ... Rated a four-star prospect by Rivals, ESPN and 247 Sports. ... Posted seven interceptions, including four returned for touchdowns, as a senior. ... Won three consecutive state Class 4A championships at Edna Karr, including back-to-back 15-victory seasons in 2017 and 2018. ... Parents are Brandy and Michael Bush Jr. ... Picked Arkansas over Auburn, Clemson, Florida, Florida State, Georgia, Kentucky, LSU, Mississippi State, Oklahoma, South Carolina, Tennessee and others.

Before the long-term master plan can get rolling, Bush needs to stake out a claim in the Razorbacks’ defensive backfield for assistant coaches Ron Cooper and Mark Smith. The 6-0, 190-pounder looks primed for playing time after valuable learning in the spring in a rotation with Jarques McClellion, Montaric Brown, LaDarrius Bishop and others.

“Why was spring good for me? I learned more techniques than I did in high school,” Bush said. “Off the field, you know I’m a more mature young man already.

“It just showed me how to take care of business when I’m off the field. I’ve got to make sure I eat right, make sure I rest at night, sleep. All of that stuff plays a big part in my performance. I just had to crack down on those little things outside of football.”

There was a little back and forth over whether Bush would enroll early or not, but he is glad he did.

“Getting this early start — not just with football, but with academics, too — was important,” he said. “I want to graduate before I’m really supposed to.”

Smith said the steady recruitment of Bush, who did not name Arkansas in his top three earlier in the recruiting process, paid off.

Winter conditioning with strength coach Trumain Carroll and his staff has built upon Bush’s solid skills.

“Devin, I think he comes from a great high school program … and just talking to coach Tru and our strength staff about him, there are guys you can definitely tell that have been really trained well within their high school program, and Devin’s one of those guys,” Smith said. “Just his attention to detail and everything that he does. I mean he’s a football junkie.

“He doesn’t say a whole lot. He’s here to go to school and get an education and play ball. That’s what he’s about 24-7. We love guys that love playing football and love doing what they do. He just fits who we want in an Arkansas Razorback.”

Bush credits senior linebacker De’Jon “Scoota” Harris, another New Orleans-area Razorback, and fellow freshman defensive back Greg Brooks, also from New Orleans, for helping him run with the Hogs. Brooks and Bush both visited for the Razorbacks’ home game against LSU.

“I was in his ear the whole visit, like, ‘This is the place to be, we can turn this program around,’ ” Brooks said he told Bush. “That’s the plan for us.”

“I heard about Scoota playing at Ehret,” Bush said. “Over the years, we just got close. When I first got the offer from Arkansas my sophomore year he just told me to text his phone one day. We just started from there. I feel like he’s a big brother to me.”

Bush turned in one of the biggest highlights of the Red-White game when he picked off a pass from redshirt freshman John Stephen Jones and was en route for a 55-yard touchdown late in the first half.

“The pass was a little outside the receiver and that’s a free pick, so you’ve got to take advantage of those when they come your way,” Bush said.

Bush knew before hand that returnable takeaways were going to be blown dead in the spring game to diminish the risk of injuries, but he had the urge to take his interception all the way into the south end zone.

“I still tried to get to the end zone,” said Bush, who was running free on the return. “But it was a good experience. They should have let me run into the end zone. I would have celebrated a little bit.”

The Arkansas coaching staff and fan base celebrated a good bit when Bush, who had been “silently” committed to Arkansas for about a month, made his decision public in November, citing the coaching staff and the school of business for winning him over.

Coach Chad Morris liked the progress he saw out of Bush during spring drills.

“Devin had a pick-six in the spring game, and he did a lot,” Morris said. “There was a lot of learning curve that happened with him this spring.

“It’s great to have him there, great to have him a part of the program. He loves football, loves being a part. I don’t think either he or Greg [Brooks] realized they were going to get as many reps as they got, so when they got there it was kind of like, ‘OK, I have to adjust to the speed of the game.’

“He’s a guy we’re counting on to have a great summer.”

Freshman receiver Trey Knox, another blue-chip signee in the incoming class, said he enjoyed his matchups against Bush in the spring.

“He’s aggressive, too,” Knox said. “He doesn’t talk much, which I like. He’s like a quiet assassin. He looks you dead in your eyes and is like, ‘Beat me.’ I like that in a corner. He uses his hands well. He has good feet, and he has good recovery speed.”

Knox ensured that the friendly competition with Bush will stretch on when asked who won their individual matchups.

Bush, who committed when the Razorbacks were 2-8 in the midst of a 2-10 season, said the Arkansas program will make strides quickly.

“The potential? I mean, people doubt us a lot,” he said. “But I say we’re going to make that bowl game. I feel like we can win more than six games. We’re definitely going to win more games than Arkansas won last year.

“I feel like a lot of this season is going to depend on the DBs and the back end, defending those receivers because the SEC has some top-notch receivers.”

Bush said the spring was not a major adjustment for him because he knew the intensity would be ramped up.

“It’s not harder than I imagined,” he said. “It’s the SEC. If you want to be the best you’ve got to train like the best. I know you’ve got to train hard every day, take care of your body, get your rest. We’d be in this facility all day, just getting treatment, doing weights, doing the small things that help your body.”

For Bush, an empire awaits.

The fifth in a summer series featuring newcomers to the University of Arkansas football team.