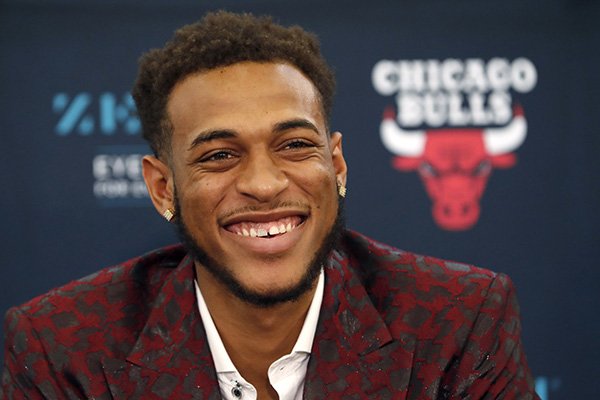 FAYETTEVILLE — Former University of Arkansas forward Daniel Gafford has agreed to a four-year, $6.1 million deal with the Chicago Bulls, according to Shams Charania of The Athletic.

Gafford was drafted 38th overall by the Bulls in the NBA Draft on June 20.

The Bulls' second-round draft pick is guaranteed at least two seasons, according to the report.

Gafford played in his first professional game Friday in the NBA Summer League. In 28 minutes against the Los Angeles Lakers, he led the team in points (21), field goal percentage (90.0) and rebounds (10).

Gafford started the scoring for the Bulls in familiar fashion. Bulls first-round pick Coby White (University of North Carolina) came off a pick-and-roll and lobbed a pass to his new teammate, who flushed it for the first points of the game.

The El Dorado native finished his college career at Arkansas as an honorable mention AP All-America, as well as the sixth Razorback to earn unanimous first team All-SEC honors.

The Bulls will be back in action Sunday at 6:30 p.m. against the Cleveland Cavaliers on ESPN.