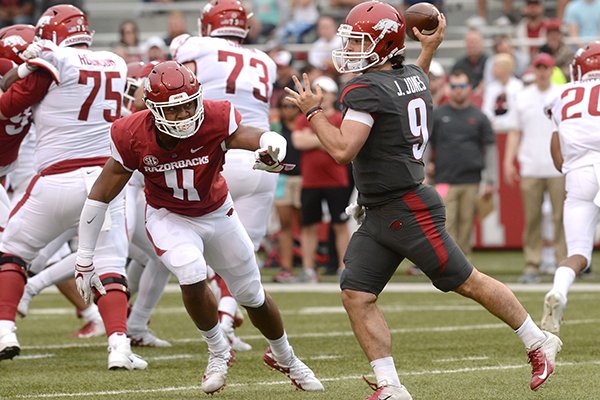 FAYETTEVILLE — There’s going to be another Soli on the defensive line for the University of Arkansas football team this fall.

Twenty-four years after Junior Soli was an all-conference defensive tackle for the Razorbacks’ first SEC West championship team in 1995, his son, Mataio, will be a freshman defensive end in 2019.

“Now to see somebody with that last name ‘Soli’ on their jersey out there playing for Arkansas again, it’s going to be pretty fun to watch,” said Junior Soli, a fifth-round draft choice by the San Diego Chargers in the 1996 NFL Draft. “And let me tell you, Mataio’s going to be way better than his pops.

“Mataio works hard, and he wants to succeed, he wants to do good. He’s the type of kid that doesn’t talk about it — he does it.”

Mataio Soli did plenty at Douglas County (Ga.) High School, located in Douglasville, just outside of Atlanta and where his father is the defensive line coach.

Mataio Soli At a Glance

NOTEWORTHY Mataio (pronounced Mah-tye-oh) is Samoan for Matthew. … His father, Junior Soli, is a native of American Samoa and was an All-SEC defensive tackle for Arkansas in 1995 when the Razorbacks won their first SEC West title. … His mother, Karen, is from Sparkman and met Junior Soli when both were UA students. … Mataio Soli was rated a four-star recruit by Rivals and 247Sports. … He had 84 tackles and 22 1/2 sacks as a high school senior, and 77 and 18 as a junior. … Early enrollee in January who worked at second-team defensive end in spring practice. … Had 2 tackles for losses of 12 yards in the Red-White game.

“A lot of people think I came to Arkansas just because my dad played here, but that really isn’t why,” Soli said. “Honestly, out of all the schools that recruited me, Arkansas was the best place for me. It just happened to play out that way, and I’m glad it did.

“I know my dad wanted me to go to Arkansas, but it’s not anything he ever told me to do. He never pressured me.”

“I wanted to come here because of the chance to play early,” Soli said. “I also felt like Arkansas’ coaches really cared about me the most. This is where I was needed and wanted.”

Soli was an early enrollee in January and went through spring practice, where he mostly got work on the second-team defense. He had three tackles in the Red-White game, including two for losses totaling 12 yards.

“He’s got great hands. He’s as good using his hands as I’ve been around.”

Ask Soli’s teammates about him, and they all talk about his hands, too.

“His hands are something crazy,” Nwanna said. “He’s always swiping and working. If his first move doesn’t work, he’ll come at you with a second move or a third move. He told me he learned that from his dad.”

Junior Soli said it was fun to coach his son in high school, but it also had its challenges.

“It was good and bad,” he said. “Most players, when they’re done with practice, they go home and get away from football. But Mataio had an in-house coach.”

Mataio Soli said it was a blessing to be coached by his father.

“It was great learning from him all the time,” Soli said. “Since he coached my position, we could work out whenever we wanted.

“It was a good setup for me. He always pushed me to be better. I’m glad he did that, because it worked out well.”

In the spring, Soli worked at right defensive end and took reps behind seniors Gabe Richardson and Jamario Bell.

“They both did a great job of helping me,” Soli said. “They showed me how to play.”

Morris said Soli is quiet most of the time.

“He doesn’t say much, which is good,” Morris said. “I like that, because he just comes to work and puts the work in.”

Soli said he didn’t realize he had two tackles for losses in the Red-White game.

“I didn’t keep track,” he said. “But I feel like I had a pretty good game, because if I didn’t my dad would have been on me.”

Junior Soli and his wife, Karen, attended the Red-White game.

“Watching Mataio, it looks like he’s making a smooth transition into Division I football,” Junior Soli said. “He’s put on some good weight, but it doesn’t look like he’s missing a step.”

“The added weight makes me more dangerous,” he said. “Makes me stronger. I’ll be able to handle the big offensive tackles better.

“It hasn’t affected my speed at all. I’ve still got that quick first step.

“I feel great, but I think I can get even more good weight on before the season. I plan on doing that.”

Soli said a good performance in the Red-White game was a boost going into summer workouts.

“It does a lot for your confidence,” he said. “Just a few months before you were playing with kids, and now you’re with grown men, and you’re still being successful.”

Soli said he’s eager to play this season, but he’s not worried about his role on the team.

“I’m leaving it in God’s hands and leaving it in the coaches’ hands,” he said. “I know I’m ready to play. It’s whenever they call my number.”

Soli is grateful he was an early enrollee.

“I promise you, it’s the best thing you can do,” he said. “It benefited me a lot, because I don’t even feel I’m a freshman to be honest with you. I’ve already been through spring ball, and I’ve bonded with most everybody on the team.”

Junior Soli said he didn’t know whether his son would go to Arkansas until Mataio told his parents he was committing to the Razorbacks during his official visit last summer.

“That wasn’t going to be our decision, that was going to be his decision to make, because he’s the one that’s going to have to experience all that.