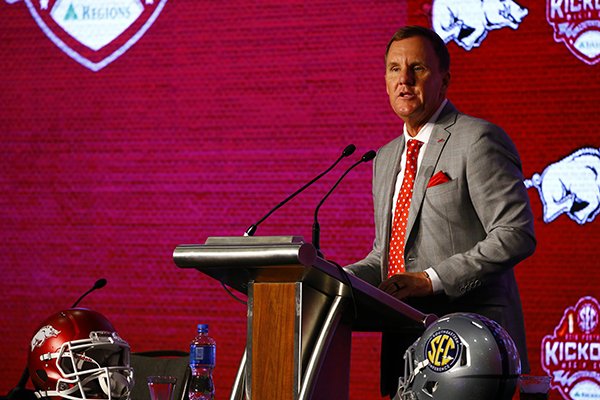 HOOVER, Ala. -- When the University of Arkansas contingent entered the crowded lobby at the Hyatt Wynfrey Hotel here on Wednesday morning, a cheer arose from a big mass of Alabama fans. The crimson and houndstooth clad Bama fans had been expecting Coach Nick Saban and three of his Crimson Tide players to be the first-arriving group on Day 3 at SEC Media Days.

The fans might have briefly mistaken the Razorbacks for Alabama players on an early morning in July, but there has been little comparison between the two SEC West programs during recent fall Saturdays.

While the Crimson Tide have powered to five national championships in the last 10 years, Arkansas has dropped into the SEC West cellar with two winless league seasons in the last six years, including 2018.

Arkansas Coach Chad Morris was dishing out doses of reality, not dodging the current state of affairs, in his time at the podium at the annual media showcase on Wednesday.

The second-year football coach didn't shy away from the pain of his 2-10 debut season in 2018, and he wasn't painting a picture filled with rainbows for the Razorbacks this fall. He discussed the continued laying of groundwork to build Arkansas back into contention.

"We know this, that in Year 2 as we move forward, the successes that were happening [inside the program] in Year 1 will show up on Saturdays," Morris said.

"And it wasn't fun. It wasn't a lot of fun when you go through tough times like that. But we know that building a program, there's a process that you have to go through. It's not fun. It's not always easy. But it's always necessary."

Morris thinks a postseason bowl bid is a reasonable expectation this season, but he knows the effort it will take to get there is simply another necessary step in the process of building Arkansas into a consistent winner.

"When you look at expectations for Year 2 and wins and losses, I'm not going to put a number on it," Morris said. "I know inside our program, in talking to our seniors and our leaders, they want to leave their legacy.

"And getting this program into the postseason is definitely a goal of ours and it's something we've talked about."

"We've been building since he got here last year," Harris said. "I always respect Coach Morris. It didn't take much for me to buy in."

Senior defensive tackle McTelvin Agim understood the Razorbacks are very likely to be picked last in the SEC again after going 0-8 in conference play and bringing an 11-game league losing streak into the season.

Arkansas at a glance

Bowl scenario The Razorbacks need to sweep their non-conference games and win two SEC games to reach the postseason. To do that, the Hogs must be more competitive in the fourth quarter, stay on the field longer on offense and play better third-down defense. Arkansas must also dramatically improve its poor turnover margin.

"But we work every day. We work just like everybody else in this conference, the way everybody in this nation works. So we're not backing down. We're not writing if off, we're not 'OK, we're having another 2-10 year.' Nah, we're coming to get something."

Harris parlayed a question about playing in throwback Darren McFadden-era uniforms this year into his designs for his final season.

"Most definitely we've improved and we're going to continue to improve," he said. "The whole team's been working hard. We're hoping to have some improvements, which there will be."

Agim noted the difficulty level of life in the SEC West.

"It's very hard," he said. "Every game is about the same, talent wise. We've been in a lot of those games. I feel like they're winnable this year for us if we just do the right things."

Morris thinks the experience of helping Clemson grow into a national contender during his four years as offensive coordinator for the Tigers (2011-14) and his work turning the SMU program around from a 1-win team has provided him valuable tools in engineering a Razorback revival.

"When you take a head football coaching job, you know that establishing and enhancing a culture is your top priority, and it takes time and it takes consistency, and there's a certain process to follow to develop the results that you're looking for," Morris said.

"You can look at examples for guys that I worked for. Coach [Dabo] Swinney, guys in this league. Dan Mullen and Mark Stoops. It didn't happen overnight."

Morris and the three Razorbacks at media days defended his work at building relationships with players. Morris was criticized in that department by what was described as a former player in a recent report by the "Inside The Team" Twitter account.

Morris said forming and strengthening relationships with players is "on the constant forefront" of he and his staff.

"I did see it, but I've never heard nothing like that in the locker room," Agim said. "Coach Chad, I really believe, is a player's coach. ... He has a good heart."

Said Harris, "We saw it on Twitter. We know the truth behind everything. It's just something they put out. We don't worry about it.

Whaley said he didn't read much into the anonymous criticism.

"He's great with players," Whaley said. "I mean, he's a great coach and a great person. ... He builds relationships with his players and he loves his players."

Third in a series previewing the 2019 SEC football season.