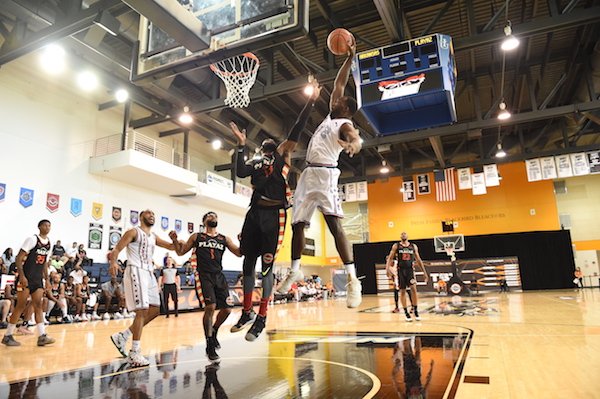 FAYETTEVILLE — Eleven former Razorbacks, one former Blue Devil and one former Gator will come together to form Team Arkansas in Memphis on Friday night in a quest to win $2 million.

Team Arkansas, with former Razorback and current New York Knicks forward Bobby Portis serving as its head coach, is one of 64 teams competing in the sixth annual The Basketball Tournament.

A single-elimination format modeled after the NCAA Tournament, TBT features former collegiate players who are not playing in the NBA.

Third-seeded Team Arkansas, which won its opening game in the event last year, will face sixth-seeded Louisiana Elite on Friday at 6:40 p.m. at Elma Roane Field House in the Memphis Regional. The game will be available on ESPN3.

“We’ve hit it hard up in Northwest Arkansas for two weeks now,” noted Team Arkansas general manager Kevin Kelly, whose squad got a chance to work out some in front of new Arkansas coach Eric Musselman at the Razorback Performance Center. “Coach Musselman got the chance to meet all of us and allowed us to use their prestigious practice facility.”

Kelly believes this year’s squad, which beat Tim Thomas Playaz (85-62) before losing to Talladaga Knights (91-74) last summer, is more serious and motivated to go after the $2 million winner-take-all prize money awarded to the championship team.

“We’ve got guys asking for extra workouts and to help them put up extra shots; never had that last year,” Kelly said. “We’re ready to go to battle with 13 professionals.”

Team Arkansas has added former Razorbacks big men Darian Townes (6-10) and Delvon Johnson (6-9) to a front line that will be missing Moses Kingsley (6-10) and Vincent Hunter (6-9), who will both be inactive.

“Last year, we may have lacked a bit of talent in the paint, but the guys that came saw what competing in TBT is all about,” Kelly said. “It wasn’t hard at all to gain even more talent on our 2019 squad.”

The Memphis Regional will also feature No. 1 Gael Force (former St. Mary’s players) vs. No. 8 Jackson Tennessee Underdawgs and Jaylen Barford on Friday at 8:30 p.m.

The Team Arkansas-Louisiana Elite winner will face the Brawlers-Gentlemen victor Saturday at 5 p.m with the Memphis Regional final set for Sunday at 2 p.m.

The quarterfinals are set for the following Thursday and Friday in Chicago, which will also host the semifinals on Sunday, Aug. 4, and the finals on Tuesday, Aug. 6.