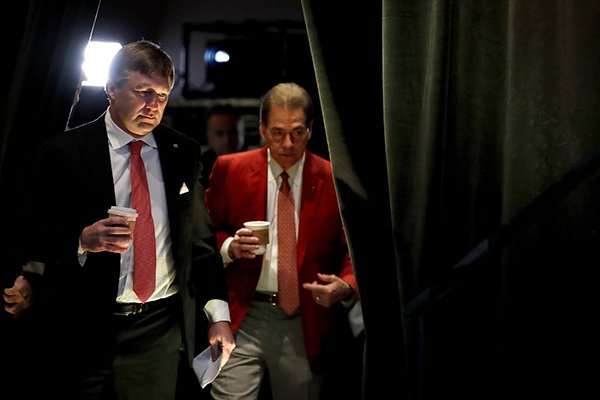 HOOVER, Ala. — Georgia Coach Kirby Smart was asked at SEC media days what it would take to get over the hump and beat Alabama in big games.

The Bulldogs blew second-half leads in falling to the Crimson Tide in both the College Football Playoff national championship game after the 2017 season and the 2018 SEC Championship Game. On both occasions, Alabama Coach Nick Saban inserted a backup quarterback to spearhead the rally.

“Yeah, get rid of their backup quarterback. That’s part of the plan,” Smart replied, tongue in cheek.

Former Alabama tailback Damien Harris, now with the New England Patriots, played along with the gag. He wrote on his Twitter account, “Y’all better stay away from my son” and tagged reserve quarterback Mac Jones’ Twitter handle.

Will Hastings, listed at 5-10 and 174 pounds, is not physically imposing.

“He looks like he’s about 13 years old,” Auburn Coach Gus Malzahn said. “If you ever see him, you wouldn’t think he’s an SEC player.”

But Hastings, a senior from Little Rock, figures to be a key part of the offense after redshirting in 2018 because of a knee injury.

“Last year, not having him, it really hurt us,” Malzahn said. “Will can get open versus anybody covering him in a man-to-man situation.”

Hastings, who is now on scholarship, came to Auburn from Pulaski Academy as a walk-on.

Don’t be a bum

University of Arkansas Coach Chad Morris said recruiting has to be on point for the Razorbacks to emerge as a contender in the SEC.

“We gotta continue to recruit every day,” Morris said. “It’s like shaving. If you don’t do it every day … you look like a bum.”

Vanderbilt Coach Derek Mason took a question about the benefits of entering his sixth season with the Commodores in an interesting direction.

After mentioning that it meant his mission statement was in line with the school’s direction, he added, “I’m a blue-collar guy. You look at the suit and maybe the shoes and say, ‘This guy’s got swag,’ and I do. I truly believe that.

“But I also know and understand that a place like Vanderbilt is special, and you got to be a grass-roots guy. We’ve been growing this thing organically.”

A reporter asked Coach Mark Stoops if 10 wins, not achieved in 40 years, is now the benchmark for the program, and Stoops took the question in a humorous direction.

“Did you say four or 40?” Stoops asked back. “It’s been a long time since we’ve won that [many], and we’re proud of that accomplishment. But we want more.”

“The Vandy Whistler is everywhere,” Mason said. “Sometimes I think I hear him outside my window. I know he’s annoying to y’all. To Vandy, there on the West End, he’s the man.”

The lead whistler, whose name is Preacher Franklin, has gained notoriety for his piercing whistles at Vanderbilt baseball games. There are actually two Vandy Whistlers, Franklin and Jeff Pack.

LSU quarterback Joe Burrow, an Ohio State transfer, said his growth as a person included learning to do his laundry.

“This is very embarrassing, but I’d never done laundry until I moved to Louisiana,” Burrow said. “My mom drove up from home [in Ohio] an hour away and did my laundry for me. Yeah, quick dive into my insecurities. I’m pretty good at laundry now, but I’m still trying to learn the dryer.

“My clothes weren’t getting dry for so long, I was like, ‘What’s going on here?’ My Dad came in and pulled that thing [lint filter] out, and there was like a bunch of dust.”

Missouri graduate transfer quarterback Kelly Bryant said it was about 60 degrees and sunny when he took his recruiting visit to Columbia, Mo., in October.

Then he enrolled at Missouri in January.

“It was cold,” said Bryant, who grew up in South Carolina and transferred from Clemson. “They didn’t tell me about that during my visit. I was like, ‘Well, OK, here we go.’

“I remember after one workout, I walked outside, looked at my phone and it was negative-15 degrees. It was snowing, too. I was like, ‘Man, it’s going to be a long winter.’ But I got adjusted to it. I got a big jacket and some snow boots.”

Vanderbilt Coach Derek Mason is high on his tight end Jared Pinkney, who had 50 receptions for 774 yards and 7 touchdowns last season.

“Jared Pinkney is the best in-line blocking tight end and pass catching tight end in the country,” Mason said. “I make no bones about that.”

Alabama broadcaster Eli Gold has been selected by the National Football Foundation & College Hall of Fame to receive the 2019 NFF Chris Schenkel Award at the group’s annual awards dinner in New York City on Dec. 10.

The Schenkel Award has been presented annually since 1996 to recognize individuals for distinguished careers in broadcasting. It is named for Chris Schenkel, the longtime ABC Sports broadcaster.

Gold has been the voice of the Crimson Tide for 30 years.

South Carolina quarterback Jake Bentley had some advice for freshman quarterbacks during his third appearance at SEC media days.

When asked what he would tell freshman quarterbacks to “block out the noise,” Bentley suggested they could go to their Twitter accounts, hold their cursor over the “X” and delete the account.

SEC Commissioner Greg Sankey shot down any idea of league realignment in the near future.

Sankey, asked whether there had been any more discussions on conference realignment, replied, “Not unless I’m asked in a press conference.

“My answer was, ‘There was a time where we said it was on the back burner. Earlier in June, I said it’s up in the cupboard some place in the kitchen.’”

The betting site sportsbetting.ag has listed odds for 12 teams to win the SEC championship, led by Alabama’s 1-2 and Georgia’s 5-2.

The two teams who were left out: Arkansas and Missouri. The Razorbacks are coming off a 2-10 season, which included an 0-8 run through the SEC in Coach Chad Morris’ debut season. Missouri is currently ineligible to play in the SEC title game or the postseason due to its NCAA infractions case dealing with academic fraud involving a tutor.

Only four of 14 SEC teams have losing bowl records, and it just happens to be the four newest additions to the league: Arkansas, Missouri, South Carolina and Texas A&M.

Kentucky evened its bowl mark at 9-9 with last season’s 27-24 victory over Penn State in the Citrus Bowl.

LSU Coach Ed Orgeron pointed out an alarming statistic that he said must be corrected if the Tigers are to contend in 2019.

“We gave up 167 rushing yards per game,” Orgeron said. “That’s not championship football. That’s not LSU football. So we have to stop the run. There’s no question we need to get better in tackling, gap fits, schemes, tackles for loss, whatever it may take to stop the run.”

The Fromms of Warner Robins, Ga., will have a tough decision to make when Georgia plays at Auburn on Nov. 16.

Their son Jake is the third-year starting quarterback for the Georgia Bulldogs. Jake’s younger brother, Tyler, is a 6-5, 218-pound freshman tight end at Auburn.

“Hopefully my brother can give me a couple of clues as to what they’re doing on defense,” Jake Fromm said jokingly on Tuesday. “I don’t know how my parents will do, what they’ll wear or how they’ll get there and all that stuff, but it’s going to be fun for me and Tyler.”

Ole Miss quarterback Matt Corral had been committed to Florida before flipping to the Rebels, where he redshirted after playing in four games in 2018.

“It was the coaching change,” Corral said when asked why he backed away from Florida. “It just didn’t mesh right with me and others. We had a top-three class going in there, but none of that stuff matters anymore. We’re moving on from there. All I’m worried about is winning games for Ole Miss.”

Corral is one of very few freshmen who have attended SEC media days.

“I’m grateful for the opportunity for Coach [Matt] Luke to pick me and these other guys, just to represent Ole Miss.”

No players have transferred since Missouri was hit with NCAA penalties in late January, which Tigers Coach Barry Odom attributed to the team’s leadership and camaraderie.

“You look at the things that they’ve done together, the investment they had with each other, the brotherhood, the love, and the care for each other,” Odom said. “I think they drew a line in the sand and said this is what we’re going to do in 2019 as a team together, and they stood by it.”

Vanderbilt Coach Derek Mason does not allow his players to wear their undershirts untucked, even at practices. The shirts, which players wear under their pads, must be tucked into their practice pants.

“If there was a fine for it, I’d have the most fines for not tucking my shirt in,” receiver Kalija Lipscomb said.

College football will hold 40 bowl games again this postseason, but changes are in store for the 2020 season.

Three new bowls will join the schedule for the 2020-2025 cycle: the Las Vegas Bowl, the Myrtle Beach Bowl and a new bowl in Los Angeles.

The SEC and Big Ten also will split six appearances in the Belk Bowl against an ACC team.

The Los Angeles Bowl will be played at Los Angeles Stadium at Hollywood Park, which will open in 2020. The stadium will host the 2023 CFP title game.