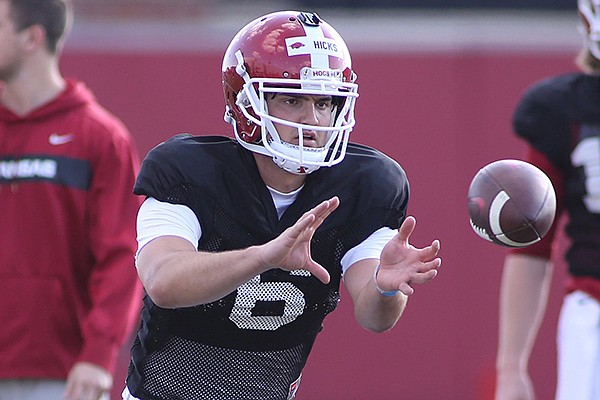 Q: What was your impression of Ben Hicks throughout spring practices?

Clay Henry: Hicks has the arm strength to be dangerous in the SEC. His success will be related to the development of the offensive line and Cheyenne O'Grady's off-the-field decisions. O'Grady could make a lot of money playing with Hicks this year, but he's got to quit being a knucklehead. If Hicks has protection, he can deliver the ball. I think the receivers will be improved and the addition of Trey Knox will help.

Dudley Dawson: I think Ben looked very sharp and polished this spring and I have no doubt that quarterback play level this season is going to be much higher than it was in Coach Morris’ first summer. My only question is can he hold off Nick Starkel all year?

Tom Murphy: Clearly he showed his leadership chops for starters. Interesting he pointed out about midway through spring that the Razorbacks were still trying to hone in on what they do best. That perhaps reflected that so much skill talent missed all or chunks of spring. We didn't see a ton of downfield passing in the spring, so getting a look at his accuracy and arm strength in camp is imperative. How Hicks meshed with the receivers throughout the summer will be so critical for timing and flow concerns early in the year.

Scottie Bordelon: In interview settings I found him to be very mature and sure of himself, and not in a negative way. He's not short on confidence, charisma or personality, and his answers were almost always insightful, whether he was talking about the offensive line, receivers or his own play. Teammates spoke highly of him as a leader, so that tells you he got to campus and developed solid relationships with players very quickly. In a word, I'd say he was comfortable. And as Clay alluded to, if the offensive line can provide him time to throw, he can lead this offense because he has a good arm and those around him believe in him.

Q: Does Nick Starkel's SEC experience level the playing field in this position battle although Hicks went through spring drills?

The main concern I have for Hicks is if he can stay healthy behind this offensive line. The best play last year was a Ty Storey scramble. That is not what Hicks does best, nor should it be what any quarterback has to do.

Dudley Dawson: I think it helps, but obviously Hicks has the edge in terms of knowing the offense, knowing what the coaches want out of him and being more familiar with the players around him. That being said, Starkel is extremely confident in his ability and I expect an all-out battle for the job.

I also think it is positive and not a negative for Nick that he has two years left. While I think both guys are going to play, I think if they are about even, Starkel might take over the job because he would then be the guy next season.

Tom Murphy: I don't think it completely levels the field as Hicks had three seasons in this offense prior to transferring. But Starkel's credentials, which include a rifle arm and the winning of the starting job at A&M for the 2017 season, bode well if the coaches do some rotating at the spot.

Scottie Bordelon: I was asked on the radio a couple of months ago who I thought would start at quarterback this fall and my answer was Hicks because of his familiarity with the scheme and coaching staff. That is something, as well as having spring drills under his belt, I think gives him a leg up even though Starkel does have starting experience in this league, which is intriguing and one reason he was brought in. In my mind, though, Hicks enters fall practices as the frontrunner for the job.

Seth Campbell: I think Nick Starkel's athletic ability paired with his SEC experience will level the playing field with Ben Hicks. Although Starkel only started periodically for Texas A&M during his time there, he did play against five different Southeastern Conference teams (Mississippi State, Auburn, LSU, Ole Miss, Alabama) while Ben Hicks played against just five power five teams (TCU three times, Michigan, Baylor) in his tenure at SMU. Chad Morris said at SEC Media Days that the ball flies out of Starkel's hand, and I think his arm talent makes Starkel the better option at quarterback. The problem is he doesn't have the experience with Morris' offense like Ben Hicks.

Clay Henry: I think it's over that. The key is for there to be more big plays. Again, Hicks (and Starkel) have the down-the-field arm that this offense aches for, but they need time.

Dudley Dawson: Over. I’m predicting more like 30 as Arkansas surely scores more points than the 260 of last season while giving up 417. Hicks threw 33 TD passes in his last year with the Arkansas staff while Starkel tossed 14 in seven games two seasons ago while missing the other six games due to an injury.

Scottie Bordelon: I think 20 is a pretty solid number, but I'll go slightly over. Maybe in the 22-23 range. Whoever is at quarterback will no doubt - or should - target Cheyenne O'Grady and other tight ends in the red zone. O'Grady has sure hands and will likely catch his share. Rakeem Boyd showed the ability to catch out of the backfield and in the screen game and make splash plays last year, too, and Mike Woods, Trey Knox and others should make a few big plays.

Seth Campbell: Over. Not only should this be over, but if the Razorbacks want to win more than two games this year I'm going to say they need this number to be over 20. In a dismal year last year they still almost hit this number (17). Ben Hicks in his last year with Chad Morris threw 33 touchdowns. Now, don't get me wrong, he had help with future second-round draft pick Courtland Sutton, but still Morris likes to throw the ball around and I believe Arkansas will be able to do that with more talented quarterback play.

However, the key to this number has little to do with the quarterback, but the focal point should be the offensive line. The Hogs gave up 32 sacks last year, which can't happen if you want to throw more than 20 touchdown passes. The loss of Hjalte Froholdt hurts, but with two junior college guys coming in to compete on the offensive line the trenches should be improved. This makes me believe over is very achievable for this team.

True or false: Arkansas will rank in the bottom half of the SEC in passing yards per game. Georgia was 8th in the league last season at 225.5 yards, and Arkansas was 12th at 191 per game.

Clay Henry: The Hogs will move up a few spots in the SEC rankings via the pass, but that's not as important as moving up with the run. First and second down have to improve. If that happens, the big plays in the passing game will ignite this offense. I do not think the opposing safeties ever had to play run against Arkansas last year.

Dudley Dawson: False. I think they will get over that with tight end CJ O’Grady’s breakout season, the emergence of sophomore Mike Woods and the additions of freshman tight end Hudson Henry and freshmen receivers Trey Knox and Treylon Burks.

Tom Murphy: Bottom half. The Razorbacks should creep up to over 200 passing yards per game, but because tailback is probably the deepest position on the team it would make sense to give that group quality touches every game and make a push toward balance.

Scottie Bordelon: True. There is a lot of quarterback talent in the SEC - Tua Tagovailoa, Jake Fromm, Jake Bentley, Kelly Bryant, etc. - that will put up big numbers this year. If the offensive line comes together then Arkansas might be able to jump into the top 10, but climbing into the top half probably isn't going to happen.

Seth Campbell: True. Like I said earlier, the offensive line is important in the passing game, and while the trenches have improved, they still compete in the SEC. As I went down the list of SEC schools I didn't see how Arkansas could finish in the top half of the league. I would put Alabama, Florida, Missouri, South Carolina and Texas A&M in the upper tier of passing yards per game. Kentucky, Vanderbilt and Tennessee are in the bottom tier of the conference. That leaves six teams, including Arkansas, in that middle tier vying for two spots. I don't see the Razorbacks accomplishing that task in year two under Morris.