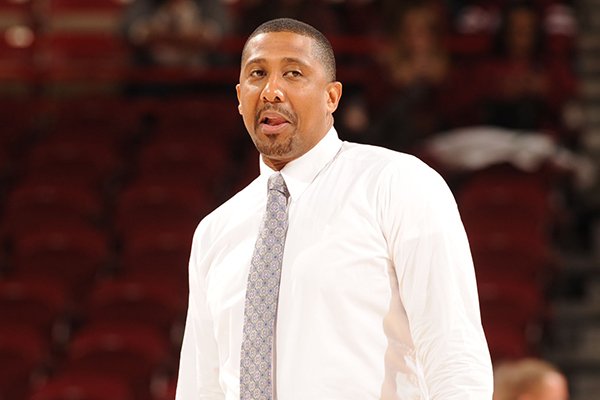 Scotty Thurman, director of student-athlete development for the Arkansas basketball team, watches as the Razorbacks warm up before playing Alabama Wednesday, Feb. 5, 2014, in Bud Walton Arena in Fayetteville.

“I am extremely excited to take over the Parkview program,” Thurman said. “It has been a successful academic institution and a traditional power in basketball. I am super excited to be named head basketball coach.”

He replaces Al Flanigan, who retired after winning seven state titles in 11 championship game appearances as the Patriots coach. He had a 545-147 record in 23 years at the school while also winning 12 conference championships.

“This is a tremendous opportunity to build on to the legacy that Coach Flanigan and his staff have already set,” Thurman said. “I couldn’t be more proud and excited to get started working with Parkview, its faculty, staff, administration and its student body.”

Thurman, who was an assistant coach on Arkansas coach Mike Anderson’s staff for three seasons, was an All-SEC forward for the Razorbacks from 1993-95 and ranks 10th on Arkansas' all-time scoring list with 1,650 points.

Prior to his promotion to assistant, Thurman was the director of student-athlete development for six seasons. He helped the Razorbacks to 67-38 record as an assistant.

"We are excited that Scotty Thurman will be at the helm as Head Basketball Coach at Parkview," said Parkview Interim Principal James Castleberry in a release from the Little Rock School District. "He brings with him great diversity in experience, exemplifying the student-athlete and success at every level - as an educator, athlete and coach. We are thrilled that he will be the face of the continuing legacy of success of Parkview basketball."

Little Rock is like a second home to Thurman, who earned a bachelor’s degree from Philander Smith College and masters in secondary education from the University of Arkansas at Little Rock in 2012.

“It is the right fit for a lot of reasons,” Thurman said. “I have many friends and family that attended school at Parkview. To have an opportunity to coach in front of close friends, extended family, while trying to impact the lives of student-athletes in an area that I love is an amazing feeling.”

Thurman often worked out at Parkview while playing professionally overseas. The opportunity to coach at Parkview is a surreal experience.

“I used to workout there in the summer with Derek Fisher, Corliss (Williamson), Dion Cross, Maurice Robinson and others,” Thurman said.

In three years as a Razorback, Thurman helped the Razorbacks to a 85-19 record and was the only player in Arkansas history to be named to the All-SEC first team three times. Thurman was named an All-American in 1994 and 1995 when the Razorbacks went to back-to-back Final Fours and played in the national championship game.

Thurman is best known for helping the Razorbacks to the 1994 national championship by hitting a 3-pointer with 53 seconds to put Arkansas up 73-70 in the 76-72 win over Duke.

“I am looking to play a fast-paced, hard-nosed style,” Thurman said. “We will execute offensively and apply defensive pressure, both half court and full court. Our student-athletes will enjoy the pace that we practice and play with. The goal is to put up a lot of points while holding our opponents to low-scoring nights.”

Thurman is carefully putting together his staff.

“I have been thinking about staff on a daily basis,” Thurman said. “I am still in the process of making contact with some coaches and teachers and figuring out who complements the program and myself best. I want to make sure that I get dedicated, hardworking people that have the best interests of the student-athletes on and off the floor.”

Thurman's selection is pending approval by Arkansas Education Commissioner Johnny Key, who serves as LRSD's board of directors, according to the release.