Gators first on the field 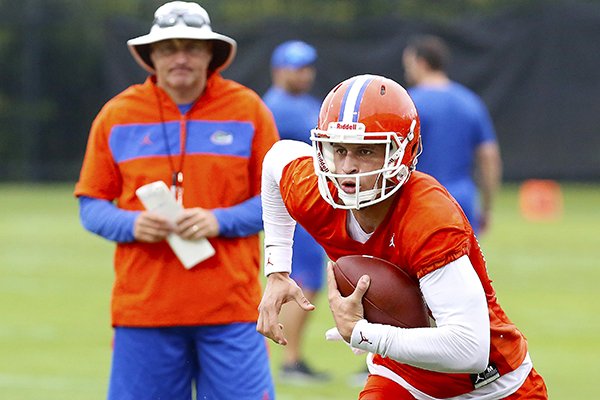 GAINESVILLE, Fla. — Even though Dan Mullen has enjoyed plenty of success as a head coach at Mississippi State and Florida, he's never won more than 10 games in a season.

He seems poised for a breakthrough.

He certainly has a team capable of making it happen.

Mullen opened his second season with the Gators on Friday amid the program's highest expectations in nearly a decade. Florida made a six-win jump in Mullen's inaugural campaign and believes a number of returning starters and coaching continuity will help maintain the upward trend.

Florida will play Miami on Aug. 24 at the kickoff to college football's 150th season. Teams that begin their season on Aug. 31 - such as Arkansas - begin practice next Friday.

"We have some guys that can look at last season and have the maturity to look and say, 'Hey, we had 10 wins, but we missed some opportunities,'" Mullen said. "We could have been even better. ... There also were some games that we let get awful close that it could very easily have been an eight-win season, seven-win season.

"When you really understand that and understand how small the margin for error is, that's how you get those wins. That's why it is so difficult."

Much of Florida's turnaround in 2018 could be traced to the 4-7 debacle the previous year. The offense was downright inept in 2017, the defense faded down the stretch and coach Jim McElwain was gone before November.

Mullen harnessed all his players' frustration for motivation, and it worked. Now, the Gators are expected to open the season with their highest ranking in the AP poll since 2010.

Maintaining it could be more difficult in Year 2, especially with what appears to be a more daunting schedule. The Gators open against Miami on Aug. 24 in Orlando. They also face Georgia in Jacksonville, Auburn on homecoming and have road games against Kentucky, LSU, South Carolina and Missouri.

Miami and Florida last played in 2013, with the Hurricanes winning for the seventh time in the last eight meetings.

"We're ready and anxious to get this season started for that game," quarterback Feleipe Franks said.

Franks is a main reason for Florida's optimism. He was one of the country's most improved passers in 2018, capable of burning defenses with his arm and legs.

Now a junior, Franks has a better grasp of Mullen's offense and his role in getting the ball to play-makers Van Jefferson, Trevon Grimes, Kadarius Toney, Tyrie Cleveland, Freddie Swain and Josh Hammond. It's the deepest and most experienced group of receivers Florida has had in years, probably since the program's last national title in 2008.

"Now that we're familiar with the offense, we're going to be a lot better," Jefferson said.

The biggest unknown is the offensive line, which has several new starters. They will be tested against Miami, which typically has one of the best defensive fronts in the Atlantic Coast Conference.

"If you're not treating it like it's the biggest game you've ever played in in your life, then you're doing the wrong thing," said center Nick Buchanan, who started 12 games as a junior. "It doesn't matter when we're playing, who's we're playing or where we're playing, put the ball down and we'll be ready."

Mullen and the Gators were relieved when defensive coordinator Todd Grantham shunned a job offer from the NFL's Cincinnati Bengals and stayed in Gainesville.

Grantham should have his best group in three seasons, a unit that features arguably the best cornerback tandem — C.J. Henderson and Marco Wilson — in the Southeastern Conference. The Gators also boast plenty of talent up front, led by Adam Shuler, Jabari Zuniga and former Louisville defensive end Jon Greenard.

It remains to be seen whether Mullen and his players have closed the gap on SEC front-runners Alabama and Georgia. But they could have enough to get Mullen more than 10 wins for the first time as a head coach.

"I hope the familiarity helps a lot, that we're able to get things done faster, quicker, smoother and progress at a much quicker rate because they know what to expect and know what's about to come. It limits question marks," Mullen said. "But I certainly hope we still play with a chip on our shoulder."