Pledges work on Ward during cookout 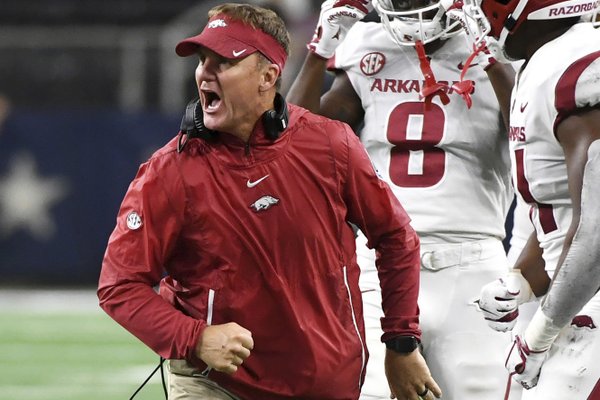 FILE - In this Sept. 29, 2018, file photo, Arkansas head coach Chad Morris celebrates with his players after a missed field goal by Texas A&amp;M during the fourth quarter of an NCAA college football game, in Arlington, Texas. After a 2-10 season, Arkansas has opened spring practice with a mantra that is as much physical as it is metaphorical: &#x201c;Earn everything.&#x201d; Coach Chad Morris will go into his second year with the Razorbacks insisting that every member of the team from the quarterback to the equipment staff gives their best. (AP Photo/Jeffrey McWhorter, File)

Arkansas offensive tackle target Brady Ward made the trip to Fayetteville for the Fall Kickoff Cookout and had some Razorback commitments in his ear.

Ward, 6-7, 310 pounds, of Mobile (Ala.) St. Paul's Episcopal recently said Arkansas, Georgia, Oklahoma and Florida State were schools he was focusing on after receiving other scholarship offers from schools such as Auburn, LSU, Florida, Kentucky, Iowa, Tennessee, Oregon, North Carolina and others.

About 25 prospects visited Arkansas for the event that started at 4 p.m. and lasted late into the night. Several commitments also attended.

"It went great," said Ward, who also visited the Razorbacks in February. "I had a great time getting to know the coaches and commits better. They're all great people and fun to hang out with."

"We just mainly talked about everything, talked about a lot of fishing," Morris said. "I just told him we're building something special and you can see that."

Tight end commitment Brandon Frazier was also in Ward's ear about the program throughout the evening.

"Brady told me that he really enjoys it out in Arkansas and could really see himself playing for us, but was going to take a few more visits before any decisions," Frazier said.