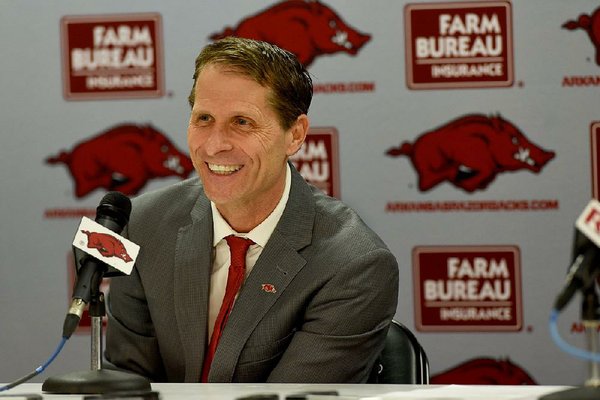 NWA Democrat-Gazette/DAVID GOTTSCHALK Eric Musselman speaks at a press conference after his introduction as the new head coach of men's basketball at the University of Arkansas by Athletic Director Hunter Yurachek Monday, April 8, 2019 in Bud Walton Arena on the campus in Fayetteville. During the previous four seasons, Musselman coached the University of Nevada in Reno to a 110-34 record.

Highly regarded guard Rondel Walker is looking forward to checking out Arkansas on an unofficial visit on Thursday.

“Just the coaches’ plans for me going forward and the overall view of the campus,” Walker said.

He said Razorbacks coach Eric Musselman is letting him know he’s wanted in Fayetteville while also talking up the NBA experience and connections that he and the staff have.

Walker averaged 10.2 points, 4.4 rebounds, 2.7 assists and 1.3 steals per game in the Nike EYBL regular season for the Texas Titans.

An ESPN 4-star prospect, Walker is also rated the No. 14 point guard and the No. 70 overall recruit in the nation for the 2020 class.

"Rondel Walker is one of the most improved players in the country," ESPN national recruiting director Paul Biancardi said. "Two years ago, I coached him at the Jay Bilas camp and you could see his future in the game."

He saved the best for the Peach Jam championships where he averaged 14.8 points, 4.4 rebounds, 4 assists and 1.6 steals while shooting 53 percent from the field and 45 percent beyond the 3-point line

"Walker had a strong spring and summer," Biancardi said. "He was fantastic with the Texas Titans at the Peach Jam. He is both effective and efficient as a shooter, spotting up or coming off screens. His drive game has purpose and he gets out as a transition lane runner and scoring threat. He has a very positive assist to turnover ratio 4-1 and you can see why I am high on him."

"When our updated rankings come out in August, look for Walker to be considered a move up prospect."

The visit on Thursday will help Walker decide whether Arkansas will get an official visit.

“I feel like after this unofficial we’ll probably go from there, like what my top schools will be,” he said. “I’ll probably focus on my visits from there.”

“I’ve been knowing him for awhile with him being in Oklahoma and coaching Oklahoma,” Walker said. “It’s different being recruited by him at two different schools, but I like it.”