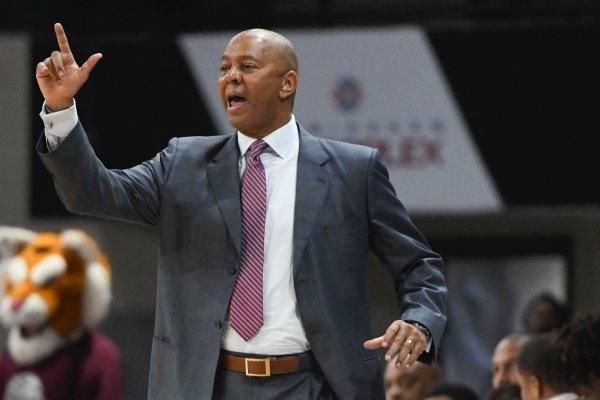 Texas Southern head coach Johnny Jones talks to the team from the sidelines during the first half of the SWAC championship NCAA college basketball game against Prairie View A&M Saturday, March 16, 2019, in Birmingham, Ala. (AP Photo/Julie Bennett)

FAYETTEVILLE — Arkansas’ men’s basketball team will host Texas Southern on Nov. 19 in Bud Walton Arena, according to the Tigers’ nonconference schedule, which was released Wednesday.

Texas Southern is the eighth known nonconference opponent for the upcoming season and sixth known nonconference date for Arkansas. The Razorbacks are scheduled to host Rice on Nov. 5, host North Texas on Nov. 12, play at Georgia Tech on Nov. 25 and host Tulsa on Dec. 14, and are under contract to return games at Indiana and Western Kentucky.

Eden Ewing, a 6-8 forward who was granted a sixth year of eligibility earlier this month, is the team's leading returning scorer at 9.3 points per game.