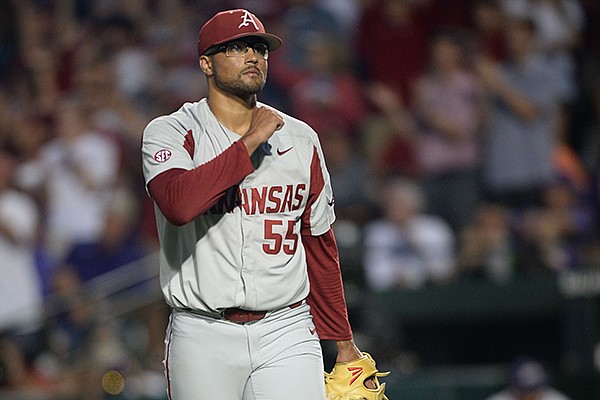 Arkansas starter Isaiah Campbell celebrates Saturday, June 1, 2019, after closing out the TCU eighth inning during the Razorbacks' 3-1 win at Baum-Walker Stadium in Fayetteville.

FAYETTEVILLE — Arkansas coach Dave Van Horn has remarked many times in 2019 about the year-over-year improvement of his ace pitcher, Isaiah Campbell.

Despite the loss of several players from the 2018 national runner-up, the Razorbacks haven’t seemed to miss a beat this season and are one win from returning to the super regionals - college baseball’s equivalent of the Sweet 16. A steady Campbell is a key reason why.

Arkansas (43-17) has lost just three of 16 games started by Campbell, who time and again has put the Razorbacks on good footing during a weekend series, or in the case of Saturday, the NCAA regional.

Following what was arguably Campbell’s best career outing - 1 run on 4 hits and 1 walk, and 8 strikeouts in 8 innings during the Razorbacks' 3-1 win over TCU - a prompted Van Horn said Campbell has made more improvement from one year to the next than any pitcher he has coached in 31 seasons.

“He’s always had talent that’s good, but to be so consistent…every week giving us a good start, it’s been fun to watch,” Van Horn said. “Because of the consistency, he’s made the biggest jump that I’ve seen.”

Campbell’s shutdown of TCU in the NCAA Fayetteville Regional was a stark contrast from 363 days earlier, when he didn’t make it out of the first inning of a regional championship start against Dallas Baptist. In fact, he didn’t record an out that night.

Campbell allowed a base hit and walked two batters last June 3. The 13-pitch start was the shortest of his career and a microcosm of an up-and-down season when he would look great one week and entirely ineffective the next.

Campbell spent the offseason analyzing his kryptonite: pitching from the stretch. In 2018, he wouldn’t be able to get past the mistake - a walk, a pitch left over the plate - that led to base runners, and his mental hurdle would snowball into subsequent walks or hits.

When Van Horn removed Campbell from the Dallas Baptist game, he had 16 weeks of data on his pitcher, much of which included some form of an unraveling at some point during a game.

What a difference a year makes.

Campbell never came close to unraveling during a 108-pitch outing against the Horned Frogs that matched the longest of his career. He seemed to get stronger as the game went along - his 101st pitch was 95 mph, just like his first pitch - and he got to leave this regional on his own terms.

Van Horn and Arkansas pitching coach Matt Hobbs discussed taking Campbell out of the game after the seventh inning, when he allowed his only run following a one-out single followed by a double and a sacrifice fly. Cody Scroggins was warmed up in the bullpen and Van Horn came close to pulling his starter.

Campbell sprinted out of the third-base dugout to a thundering roar from the announced crowd of 10,614.

“We had a big crowd tonight,” Campbell said, “so it was kind of tough not to hear it. It gave me a little adrenaline to keep going and get through the eighth.”

Campbell struck out the Horned Frogs’ Nos. 8 and 9 hitters looking at 2-2 fastballs, then got leadoff hitter Josh Watson to fly out to left field, prompting another standing ovation.

TCU coach Jim Schlossnagle said the eighth inning was an example of what Campbell did well Saturday, mixing up his four-pitch arsenal to keep the Horned Frogs off balance.

“He throws with great angle, angle to the baseball,” Schlossnagle said. “Obviously you are trying to see his fastball up, stay on the fastball. That is what we were preaching and I think every single hitter in the game got a fastball to hit, but it is a lot easier said than done when he starts sticking the curveball and slider, multiple pitches. That gets in the head of hitters.

“You could tell when we started taking fastballs for strike threes, that is telling you that his off-speed pitches are in the dome of our hitters. He is awesome. Thank goodness he can’t pitch again this weekend.”

Campbell stole the show on a night he started opposite of TCU left hander Nick Lodolo, who Baseball America rates the eighth-best prospect in Monday’s first round of the MLB Draft.

Facing such a foe was a bit unusual for Campbell. Several SEC teams - Tennessee, Texas A&M, Kentucky and Missouri - pitched off against him during the regular season and held their No. 1 starters for another game later in the series.

“After each inning we were saying, ‘That’s round one, that’s round two,’” Van Horn said, “just like it was a fight.”

Lodolo exited after throwing 93 pitches in just more than five innings. By the end of the sixth, Campbell had only thrown 80 pitches and had two more innings left in the tank.

“I’ve taken him out many a time this year early and I’ve said, ‘Hey, we’re going to need this inning later in the season,’” Van Horn said. “I think tonight we needed that inning, that eighth, and he came through and got them out 1-2-3.

“It was just a great game and a good win for our team.”