Ho-hum at home: Hogs' low-key celebration signals work to do 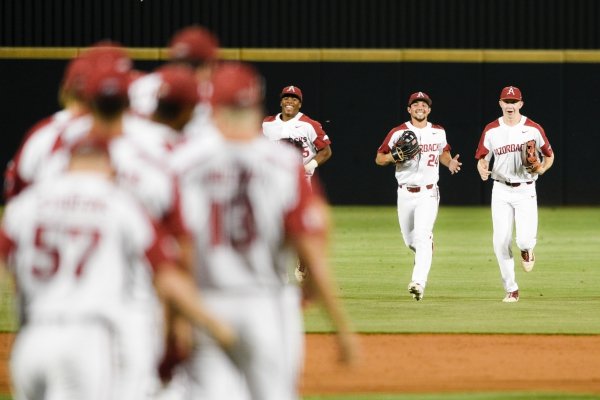 Arkansas Razorbacks players react after a 6-0 victory against Texas Christian University during the NCAA Division I Baseball Championship Regionals, Sunday, June 2, 2019 at Baum-Walker Stadium in Fayetteville.

FAYETTEVILLE -- The University of Arkansas baseball team won its 31st home game of the season Sunday night, and the Razorbacks reacted about the same as they had after their previous 30 in-state victories.

The Razorbacks were happy to beat TCU 6-0 at Baum-Walker Stadium and win the NCAA Fayetteville Regional, but there wasn't a wild celebration. No players dog piled on the mound.

NOTE: Voted on by the media

FAYETTEVILLE — The University of Arkansas baseball team’s NCAA super regional against Ole Miss, which will begin either Friday or Saturday at Baum-Walker Stadium, is a sellout, the UA announced Monday.

A small allotment of general admission tickets in the Hog Pen have been reserved for UA students and may be purchased for $20 on a first-come, first-served basis starting Wednesday. Students are limited to one ticket per person. Tickets will be available online and at the Razorback ticket office.

What days the regionals will begin, start times and on which ESPN networks they’ll be televised will be announced today.

"The players didn't do anything crazy," Arkansas Coach Dave Van Horn said. "I didn't see anything more than normal. I would say it was maybe like they'd won a series. That was good to see."

Arkansas (44-17) advanced to a super regional for the second consecutive year and will play SEC West rival Ole Miss (40-25) this weekend at Baum-Walker Stadium.

It will be the sixth super regional for the Razorbacks in the past 10 years.

"They know they accomplished something, but they haven't accomplished what we're really trying to do," Van Horn said of the Razorbacks' low-key celebration. "I didn't say anything to them after the game, but we all noticed it. That's what we want.

"We didn't have to talk about it before the regional and say, 'Hey, I don't want you guys celebrating.' I never said that to those guys."

TCU Coach Jim Schlossnagle has led the Horned Frogs to five College World Series appearances in Omaha, Neb., since 2010, including four in a row from 2014-17.

"They look like a national champion," Schlossnagle said of the Razorbacks. "I haven't seen all the other teams, but there's no question that's an Omaha team. They just have to go play like it.

"It doesn't always turn out that way -- just ask some of the national seeds that lost -- but Coach Van Horn is a Hall of Fame coach, and I'm sure he'lll have them ready to go. Playing here with this fan base and the energy in the ballpark, it will be a great weekend [at the super regional] for sure."

Arkansas freshman starter Patrick Wicklander (6-2) and junior relievers Cody Scroggins and Jacob Kostyshock combined on a five-hit shutout against TCU. Wicklander went 5 innings and allowed 3 hits, 1 walk and 7 strikeouts; Scroggins had 4 strikeouts in 2 2/3 innings; and Kostyshock got a groundout to end the eighth inning and struck out the side in the ninth.

"Everything was working overall," Wicklander said. "I fell behind a few guys, but I was able to battle back and get outs when they were needed."

The game started 30 minutes later than scheduled because of a lightning delay.

"My thought process was it's a big game, just do what I can, throw up as many zeroes as possible," Wicklander said. "Whether there was a delay or not, just have to keep my head on right."

The Razorbacks took a 3-0 lead in the first inning when Dominic Fletcher had a two-run double and Jack Kenley had an RBI double against TCU starter Jared Janczak.

"Offensively, I felt like the first inning we came out with some serious attitude," Van Horn said. "That just gave us a chance to relax a little bit. I'm sure Patrick relaxed a little bit and settled into the game."

Matt Goodheart hit a 2-2 slider from Janczak over the right-center field wall for a two-run home run in the fifth inning to push Arkansas' lead to 5-0.

"It was probably the best ball I've hit with two strikes this year," Goodheart said. "As soon as I hit it, I knew it had a good chance of going. It was the best feeling in the world."

Kenley added an RBI single in the eighth inning for the fourth run Arkansas scored with two outs.

The Razorbacks are 4-4 in regionals at home after winning the past two years.

"Teams come in and they're like, 'Hey, we're not supposed to win.' They play loose. They've got good players as well. They have something to prove and want to continue their season. Our players over the last couple of seasons have done a good job of playing in front of their own fans.

"Before, there was a year or two where we didn't play great at home. Our guys were a little stressed out."

Arkansas went 3-0 in the regional this year, beating Central Connecticut State 11-5 and TCU 3-1 before beating the Horned Frogs again.

"Their pitching," Schlossnagle said of what impressed him about the Razorbacks. "They smother you with strikes -- at least they did in the games I saw.

"Guys do multiple things right, left. Some guys are pitching off their breaking balls. They all have power arms, which is what you expect from a team that played for a national title last year and certainly is set up to do the same thing.

"From a position standpoint, they have a lot of athleticism, a lot of good baseball players. They're fun to watch -- when you're in the stands. It's not that fun in the other dugout."