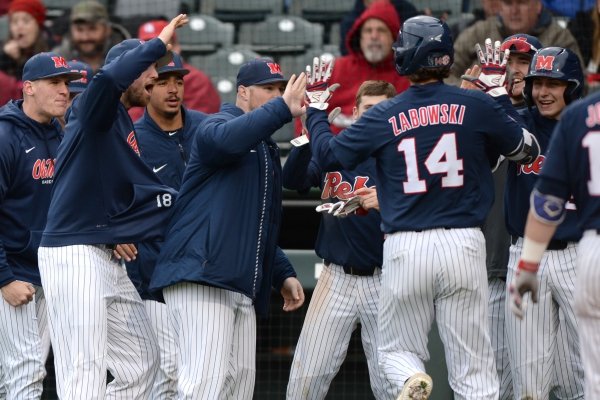 Arkansas Ole Miss Saturday, March 30, 2019, during the inning at Baum-Walker Stadium in Fayetteville. Visit nwadg.com/photos to see more photographs from the game.

The No. 5 Razorbacks and No. 18 Rebels will play for at least the sixth and seventh times this season, and maybe an eighth, at Baum-Walker Stadium in an NCAA baseball super regional starting Saturday.

The winner of the three-game series, which was declared a sell-out by Monday night, will advance to the College World Series in Omaha, Neb.

The NCAA established game times for the series on Tuesday, setting an 11 a.m. start (ESPN) for Saturday's first game and a 2 p.m. first pitch on Sunday (ESPNU). If a Game 3 is necessary, it is tentatively scheduled for 3 p.m. (ESPN2) but subject to change.

Ole Miss (40-25) won two of three games from the Razorbacks (44-17) here on March 29-31 as the first opponent to win a series at Baum-Walker Stadium since the Rebels did it in 2017. The teams also split two games at the SEC Tournament two weeks ago.

"They've gotten us three times to our two this year, so we'll be ready to get after them," Arkansas first baseman Trevor Ezell said.

"It's a little weird," Ole Miss first baseman Cole Zabowski said. "You expect when you get this late and that you get into the supers that you're facing a new team and we're unfamiliar, but here we are playing Arkansas, and I feel like we know their middle names by now."

Ole Miss shortstop Grae Kessinger, a second-round pick in the MLB Draft by Houston on Monday night, referenced the Rebels' series win in Fayetteville on Tuesday.

"It's a big series where we play well," Kessinger said. "It's going to be fun. That place is going to be electric."

Arkansas won the series opener 5-3 behind ace Isaiah Campbell, who improved to 6-0 with a victory. Ole Miss battled back to win Game 2 by a 4-3 count with 12 hits to back the pitching of freshman left-hander Doug Nikhazy, and relievers Austin Miller and Parker Caracci.

The Rebels notched the series win with a 10-5 victory, sparked by three runs in the sixth and seventh innings, on Sunday.

"I'm not really sure what it is," Kessinger said of the Rebels' solid play at Arkansas. "It's a good place for us though. We're locked into every pitch. We love the atmosphere. We love the 'everybody against us.' I think we come together and we play well."

Arkansas Coach Dave Van Horn said the advantages and disadvantages of playing a well-known opponent kind of cancel each other out at this stage of the tournament.

"I don't think it's that big of a deal that we're playing an SEC school. I don't think anybody in the SEC would prefer it. We'd rather be playing somebody else."

The NCAA Division I baseball committee, chaired by South Carolina Athletic Director Ray Tanner, set up five potential super regional matchups between conference opponents, but only two of them -- Ole Miss at Arkansas and Oklahoma State at Texas Tech -- panned out due to regional losses by Georgia Tech, Georgia and defending champion Oregon State.

"It's almost tongue-in-cheek that it makes the scouting report a little easier, which it is," he said. "Less video you have to watch. I know it's boring to hear, but it's more how you play. We've had success because we've played well."

The Rebels sport a loaded junior class, one that was ranked No. 1 in the nation when it came on board for the 2017 season.

"They're really talented, and they're an old team with older players," Van Horn said. "They kept some guys from signing last year and got a couple of guys back."

By the sixth round of the current MLB Draft, four of the Ole Miss signees from 2017 had been taken: Kessinger (Astros), pitcher Will Ethridge (Rockies, fifth round), outfielder Thomas Dillard (Brewers, fifth round) and catcher Cooper Johnson (Tigers, sixth round).

Bianco said the top-ranked 2017 class was a topic of conversation after the Rebels advanced from the NCAA Oxford Regional with a 19-4 rout of Jacksonville State.

"The entire team deserves this, obviously, [but] for me personally, it's fitting for the guys who were here last year," Bianco said. "They played so well in the regional, now to get back to a super regional and hopefully have success this weekend."

Kessinger said the 2017 signees believed they could reach the super regionals after failing to qualify for the NCAAs in 2017 and being upset at home by Tennessee Tech in a home regional as the No. 4 national seed last year.

"We all got here our freshman summer, that's what we believed, that this is what we would do," he said. "Now that we're here and playing good baseball, we've always known this is where we were going to be."