By: CHRIS BILS Special to the Democrat-Gazette
Published: Friday, June 7, 2019 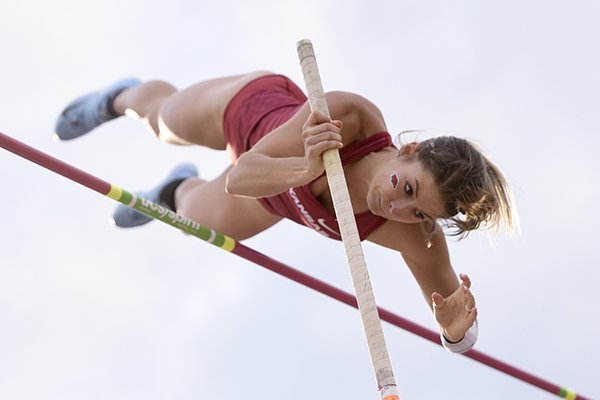 Arkansas pole vaulter Tori Hoggard competes during the SEC Outdoor Track and Field Championships on Friday, May 10, 2019, at John McDonnell Field in Fayetteville.

The Cabot natives combined for five national championships and 13 All-America honors during their four years in Fayetteville.

Arkansas senior Gabe Moore put in the fastest 1,500-meter run (4:34.34) of his track and field career on a strained hamstring to conclude a 13-hour day with a third-place finish in the men's decathlon. Moore injured his right hamstring in the pole vault at the SEC Championships in early May and entered the national meet less than 100 percent. To make matters worse, afternoon thunderstorms delayed the decathlon twice on Thursday.

"It was extremely difficult but also probably the most rewarding decathlon I've ever done," Moore said.

On the track, the top performance of the day came from Janeek Brown, a sophomore from Kingston, Jamaica. She blew away the field in the 100 hurdles in 12.53 seconds, snapping her own school record by two-hundredths of a second.

It was the fastest time in the NCAA this year and the sixth-fastest performance in collegiate history.

"I keep seeing tweets and stuff that I'm ninth, then seventh, then sixth," Brown said. "I'm really not aware. I'm just trying to get the job done, then after I'll be like, 'huh, those stats are pretty good.'"

She wouldn't name a time to shoot for in the finals on Saturday but said she has her sights set on another personal best.

"My coach said I should just keep doing what I've been doing to get here but maybe a little faster won't hurt anybody."

The performances were adding up for the Razorbacks during Thursday's preliminaries. Arkansas, ranked No. 1 in the coaches poll, was setting itself up for a potential national championship.

Payton Chadwick overcame a bruised heel that has her in a walking boot to barely qualify in the 100 hurdles; Kiara Parker secured a spot in the finals of the 100-meter dash; and Kethlin Campbell snuck through in the 400.

Taylor Werner faded in the 10,000, but used a late kick to pass Caroline Alcorta of Villanova for fourth place -- securing the Razorbacks' first points of the meet.

The women's championship is projected to come down to the final race -- the 1,600-meter relay -- with USC and Arkansas favored for the title.

"We all have a job to do and we're all doing our job correctly," Parker said. "It's exciting."

Devin Clark set herself up for a busy Saturday by qualifying in the 3,000-meter steeplechase. She'll have less than two hours between that final and her other race, the 5,000-meter run. The SEC steeplechase champion said she's trying to stay off her feet as much as possible, with the temperature expected to climb near 100 degrees on Saturday.

"It makes it so much easier to be here," Clark said of the team atmosphere. "We were actually talking about it on a run the other day, trying to imagine what it would be like to be the best one at a not-so-great school, coming here alone and having to go through everything by yourself. Everybody on our team is here for a common goal and every person counts for that."