State of the Hogs: Puppy, super regional still not lost 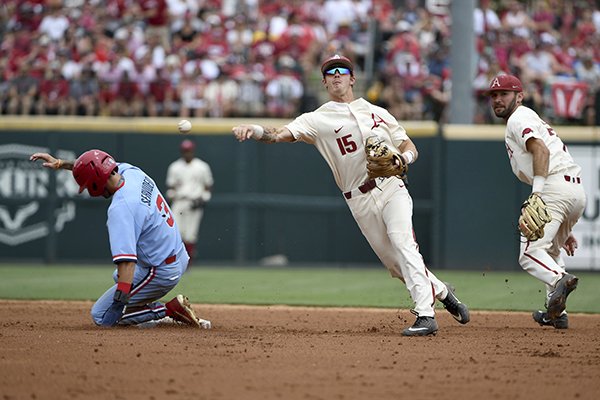 Ole Miss' Anthony Servideo, left, is forced out at second base as Arkansas infielder Casey Martin tries to turn a double play during the second inning of Game 2 at the NCAA Fayetteville Super Regional on Sunday, June 9, 2019, in Fayetteville. (AP Photo/Michael Woods)

FAYETTEVILLE — Nothing is as bad as losing your puppy. Not last year when Arkansas lost to South Carolina, 8-5, in the middle game of the NCAA Fayetteville Super Regional.

It was time to dig out Dave Van Horn’s remarks the day before the Razorbacks earned a trip to Omaha the last time with a 14-4 victory over the Gamecocks.

The Hogs will have to find the same magic as last year if they are going to make their first ever back-to-back College World Series trips. Ole Miss punished them, 13-5, Sunday.

Much like Saturday when the Rebels got a first-inning solo homer to get their hearts pumping, the Hogs got a lead in the top of the first Sunday on Dominic Fletcher’s two-run homer.

The Rebels scored three runs in the bottom of the first, five runs in the second and had few anxious moments. One came when the Hogs left the bases full in the fourth ahead of a three-run fifth.

By then, I was scouring the index of stories on our website for Van Horn’s quotes after Carolina evened the super regional last year. It’s vintage Van Horn, a deluxe straight shooter.

Asked then how he felt about his team’s chances for a Monday rebound, Van Horn jumped on it the way the Rebels pounded fastballs out of Baum-Walker Stadium on Sunday. They hit four home runs; the Hogs one.

“I'm real confident,” Van Horn said last year. “We are resilient. It's not like we just lost our puppy. We will get over it.

“This is a super regional. Everyone is good. This is the way it's supposed to be. Get your mind right. Move on. There are only a few teams left and we are one of them.”

Arkansas sent Fletcher and Casey Martin to the interview room Sunday. Both recall that series with South Carolina and know the situation is the same.

“We will be excited,” Fletcher said of Monday’s game. “Nothing is better than Game Three. We’ve got a ton of arms ready to go and we have a lot of confidence.”

Later Fletcher said, “A lot of us have been here before. Game Three is nothing we are scared of. When there is pressure there, we thrive.”

Martin was nodding yes to all of that, then said, “We play good on those days. We will play good.”

I didn’t wait until the final out to begin this column. Most was written before Fletcher and Martin joined the media for some terse, brief thoughts.

And, I felt pretty confident Van Horn hasn’t changed his thoughts. He’s said all year that he likes the fight in this team as they rallied in extra innings at Auburn as the Tigers seemed to be celebrating a series win. The Hogs ended up winning the last two of that series.

There was also the victory at Vanderbilt on Sunday when everyone but Van Horn was counting them out. I wonder how many Arkansas fans were still watching on TV when Marshall Denton recorded the final two outs for an unlikely save.

Just for perspective, Vandy might still be the best team in the nation. The Commodores got a no-hitter from Kumar Rocker on Saturday. He’s the best freshman pitcher in the SEC. Vandy, up 10 runs at the time Arkansas' game ended Sunday, is the clear favorite in Omaha.

It will be a battle of freshman starters Monday. The Rebels have a fire baller in right-hander Gunnar Hoglund. The Hogs counter with Patrick Wicklander, a lefty with big breakers and a moving fastball. He’ll try to slow down the Ole Miss bats with a sharp breaker and an equally potent slider.

It is really all either team could ask for if you asked them in preseason. Can you get to the rubber match of a super regional?

The best lines about Monday’s game didn’t center on the Ole Miss bats. Van Horn, as he always does, bemoaned the lack of control from his pitchers. Yes, the Rebels pounded 12 hits, but they were given eight walks. Noland didn’t walk anyone, but he was unable to locate his fastball and hit one batter.

“Connor was getting behind in the count and they have a powerful lineup with the wind blowing out,” Van Horn said.

Then, he focused on the walks from his next three pitchers, six by Kole Ramage.

“We walked them eight times,” Van Horn said. “They are too good when you do that. We got what we deserved. They whipped us.”

Really, there is probably not a lot that needs to be said by either coach. Ole Miss coach Mike Bianco didn’t think there was much to say to his team after Saturday’s loss. He said the Rebels “get it.” Van Horn is a lot like that at this time of year.

Van Horn said his messages are short this time of year. He thinks players appreciate not beating a dead horse.

The Hogs aren’t dead yet. Plus, they know that no one took their puppy.