Martin's tattoo a tribute to family and faith 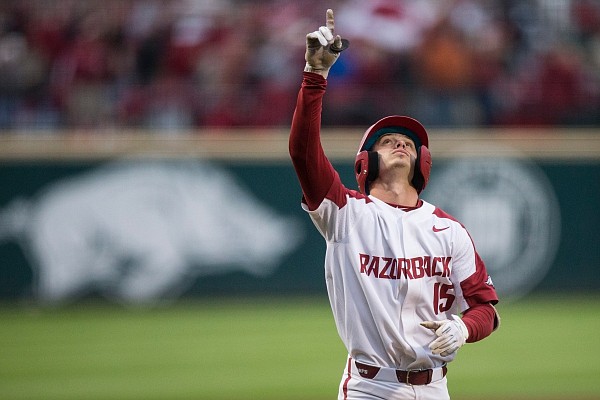 Casey Martin, Arkansas shortstop, points to the sky after hitting a home run at Baum-Walker Stadium in Fayetteville.

FAYETTEVILLE — Jennifer Martin doesn’t like to miss anything her youngest son, Casey, does on a baseball field, even if he’s just running bases before games or fine-tuning his swing in batting practice.

Taking in those moments allows her to gain a sense for his demeanor, and it sets the tone for the game for her, too. Jennifer and her husband, Keith, who for years worked in construction, don’t speak to Casey, Arkansas’ star sophomore shortstop, prior to games. It’s their thing, she says.

If they do reach out it’s typically through text message, a simple note seemingly always along the lines of “Good luck, we love you, play hard and pray before you play.”

As a family, the Martins take nothing for granted. That’s because nothing was certain four years ago when Martin was a sophomore at Lonoke High School, 25 miles east of Little Rock. In February 2015, Jennifer discovered a lump in her throat large enough that it became visible if she turned her head.

After an ultrasound the following week, she was given two options: undergo surgery to remove the growth, or a biopsy, a sample of tissue taken from the body in order to examine it more closely.

“I went in and had surgery, and it was (thyroid) cancer,” Jennifer said. “You don’t ever want to hear those words.”

Two to three weeks after the operation, oral radiation began, and for three years she visited her doctor every six weeks to have labs drawn. All reports in that span were positive, she said, and now only one visit per year is necessary unless symptoms arise.

“My doctor tells me yes, I’m in remission right now,” she added. “I asked him if he would just say I’m cured - 100 percent cured - and his words were, ‘Because of thyroid and the fact it has tissue that just grows constantly and you can never get 100 percent of the tissue that you’re never 100 percent cured.’ That’s why they watch you.

“I’ll be watched for the rest of my life. Things change and you adjust to them, and you make the best of it. … Other than that, I’m really blessed. It could have been much more horrible than it is.”

During the University of Arkansas' most recent winter break, the Razorbacks shortstop conjured up a unique, personal way to honor his mother, now a manager at a women's clinic in North Little Rock who he described as a band geek in high school, his grandfather and showcase his faith. 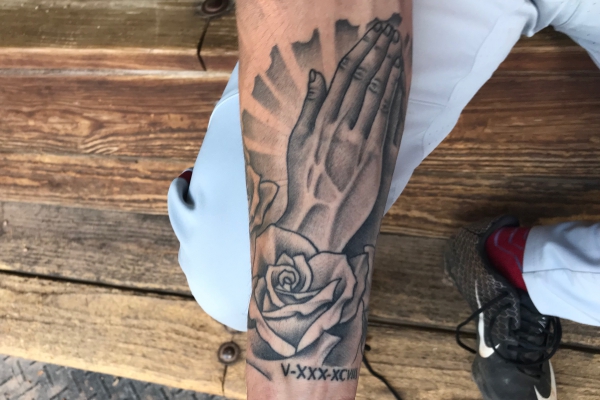 The tattoo on Arkansas shortstop Casey Martin's right forearm, which represents his faith (praying hands), his mother, Jennifer, who battled thyroid cancer (roses) and his late grandfather (roman numeral of his death date).

"She’s probably the strongest person I know in my life," Martin said. "Thanks to her and everything she’s sacrificed in her life I’m here now doing what I love. ... I basically lost my mom for a month and a half because we couldn’t see her for all the radiation and stuff she was doing.

Jennifer knew Casey was intent on getting a tattoo of some kind, but he didn't divulge what he had in mind. He had been wanting to get something to commemorate her bout with cancer for some time.

When he sent her pictures of the finished product it brought tears to her eyes.

"It was the most beautiful tattoo," she said. "Whenever he got all the roses on there - roses are my favorite - he said, ‘This is for you.’ He wanted to show that he loved me and had faith in me and was happy I’d overcome such a yucky disease."

Arkansas hitting coach Nate Thompson understands the pain of watching a loved one suffer. In early April, his father passed away after a battle with cancer. Thompson applauded Martin's tribute.

"I think he’s a very loyal kid and he’s kind of an emotional player and he lets that kind of stuff fuel him in a good way, I think," he said. "We all run into our ways to have those things and express those things. I think that’s real cool.

"He’s a good kid. He’s a hometown kid. I don’t think he’s going to forget where he comes from."

The roman numerals above Martin's wrist, which read 5-30-98, represent the date Keith's father, Elmer, died. He battled lymphoma for eight years and was buried on Keith's 30th birthday, Jennifer said.

Casey never met his grandfather, and his older brother, Cody, was only nine months old when Elmer passed away. But Jennifer and Keith made certain his memory wasn't lost on their boys.

Growing up, they shared a connection with him through baseball.

"He was a huge baseball fan, a big Dodgers fan and really athletic," said Casey, who broke an 0-for-20 stretch at the plate on June 2 - his father's birthday. "He cared a lot about other people just like my parents do. People say him and my dad are just alike, so I just kind of try to look at that sometimes and think about who he really was."

Jennifer said watching Casey play and grow through the years has been a blast. She knew he was different when he began dribbling a basketball at age 2. As they have for years now, the family is soaking in every moment.

"It was just one of those things that once he could get out on that ball field with his brother, it was unreal," Jennifer said. "He just kind of took something, fell in love with it and he ran with it.

"Watching him play at Arkansas, it’s his dream come true, but it’s been crazy fun to watch. I don’t know how to describe that."