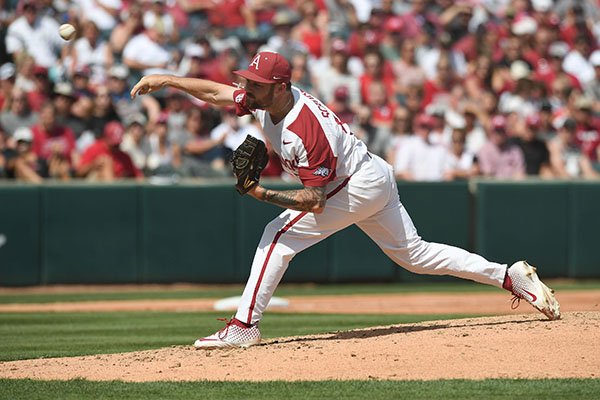 FAYETTEVILLE -- Cody Scroggins was on high alert along with the rest of the University of Arkansas bullpen at the start of Monday's decisive Game 3 of the NCAA Fayetteville Super Regional.

If starter Patrick Wicklander got into trouble, particularly in the early innings against the power-packed Ole Miss lineup, Scroggins was going to be the first reliever up for the No. 5 Razorbacks.

The call from Coach Dave Van Horn came in the second inning with two outs, runners on second and third base and the Rebels holding a 1-0 lead. A wild pitch by Wicklander to two-hole hitter Ryan Olenek had moved those runners into scoring position and set up a 2-1 count for Scroggins to inherit.

Five pitches later, Scroggins fanned Olenek with a fastball to snuff the threat and swing momentum to the home dugout.

Scroggins started the third inning with a 4-1 lead and threw four more zeroes up on the scoreboard to propel the Razorbacks to a 14-1 rout and the program's first back-to-back appearances in the College World Series.

"Cody goes out throwing the ball really well," Van Horn said. "And then he did it again and again and again. I mean, Cody was the MVP of the game. Without him we might not win that game. That was an incredible, gutsy outing."

Scroggins, a Bentonville High product, struck out 8 batters, walked none and gave up no runs on 2 hits in 41/3 innings to send the hot Rebels' bats into a slumber with a berth to Omaha on the line.

"I just kind of knew all hands on deck when I was getting warmed up," Scroggins said. "I knew it was my time. I came in in the second inning, and [Van Horn] just told me the count and said 'Go get 'em,' and that's what I did."

Scroggins (3-0) picked up his first decision since a victory at Alabama on March 24. The right-hander put in his longest outing since throwing five innings in that 10-2 win over the Crimson Tide.

Arkansas catcher Casey Opitz said Scroggins had his fastball, slider and change-up all working to both left-handed and right-handed hitters.

"He's got really good stuff," Optiz said. "I knew he was ready for that kind of moment. I could tell from him warming up that he had his stuff and he was gonna be something special."

Scroggins, who had soreness in his bicep after a start April 14 at Vanderbilt that knocked him out of the starting rotation, has been building back up with longer and longer bullpens. He gave the Razorbacks 70 critical pitches on Monday to hold the Rebels at bay while the Hogs were feasting with runs in every inning from the second to the sixth.

"Scroggins out of the bullpen was tremendous and really gave them a lift and we just couldn't figure him out," Ole Miss Coach Mike Bianco said.

Center fielder Dominic Fletcher had a straight-on view of Scroggins' artistry on Monday.

"He has the best stuff in the country," Fletcher said. "He throws 97 [mph]. He has a slider and a change-up that are un-hittable. It was awesome to watch. He went out there and gave us a bunch of zeroes, gave our offense time to work and put runs on the board."

Scroggins said the second-inning strikeout of Olenek, a right-handed hitter, was critical to his outing.

"It felt good because I mean, usually I struggle with my fastball with righties, and to strike out a righty with my fastball gave my confidence a really big boost," he said. "Going into the next inning, I felt great."

Scroggins sat down the Rebels three-up, three-down in the third inning with two strikeouts looking and had a 7-1 lead by the next time he climbed the hill.

Ole Miss catcher Cooper Johnson said the Rebels knew what they were in for when Scroggins entered.

"Obviously, we knew Scroggins was one of of their best arms and one of the better arms we've faced this year," Johnson said. "Just an electric fastball, and he comes with a four-seam and a two-seam [with] a little bit of a speed difference."

Arkansas ace Isaiah Campbell said immediately after the team's victory lap around Baum-Walker Stadium that he was eager to get in the locker room to give Scroggins a big hug.

"Yeah, he's my best friend on the team," Campbell said. "He's been battling adversity like I've been all my career with injuries and stuff and having an up-and-down career.

"To do that on the biggest stage, coming in when we needed innings, and he got out after out after out. Seeing that, I can't be more proud of that kid."