2 Red Raiders who transferred from Arkansas could play Monday 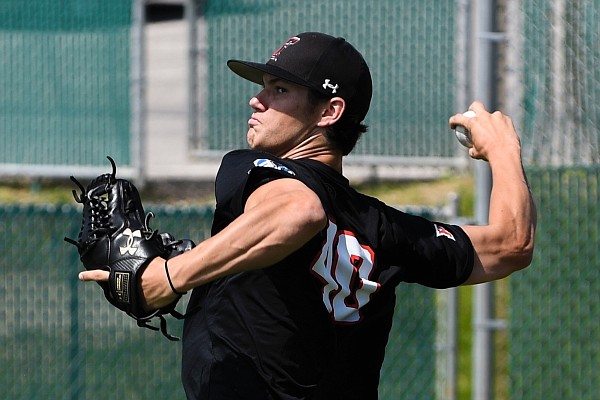 OMAHA, Neb. — There is a possibility Arkansas players will face two former teammates in their elimination game against Texas Tech.

Bryce Bonnin, a sophomore right hander who pitched for the Razorbacks in the 2018 College World Series, and Easton Murrell, an infielder who transferred to play for Tim Tadlock and the Red Raiders after his freshman season, could see the field Monday when the teams meet at 1 p.m.

But it was evident Sunday they are more concerned with keeping their season alive.

After the Red Raiders’ practice at Creighton University, Bonnin said he talked to a couple of Arkansas players Saturday night, but not for long. Arkansas catcher Casey Opitz ran into both players in the teams' hotel and kept up with them from a distance throughout the year.

Bonnin's singular focus is Texas Tech and warding off elimination.

“That’s all I’m worried about,” he said. “That’s what I came here for. I’m not trying to be distracted by anything. I’ve just got to play for my team. I hadn’t really thought about it much.”

Bonnin made 11 appearances for the Razorbacks in 2018. This season, he is third on the Red Raiders staff in wins with six and holds a 4.42 ERA over 14 appearances - 12 starts. Opponents are batting .231 against him.

Tadlock, in his Sunday media session, indicated Bonnin, who left Fayetteville largely because he had a desire to become a starting pitcher, could start against the Razorbacks.

“I think there’s some comfort level with him pitching against their guys probably five or six times, maybe even more,” Tadlock said. “I would think there is some motivation there for him.

“I think there is some human element there that wants us all to give the ball to Bryce.”

Murrell, batting .235 in 23 games played this season, was brief in his responses when asked about his time at Arkansas, essentially echoing Bonnin’s message.

“They’re good guys,” Murrell said of the Razorbacks players. “I’m just ready to go out and play with this team.”

Unlike Bonnin, Murrell did not make the trip to Omaha with Arkansas last season. He instead departed for Santa Barbara, Calif., prior to postseason play for summer ball. When asked about the sequence of events that led to his transfer from Arkansas, Murrell paused before adding, “Things went down.”

“(Texas Tech recruiting coordinator J-Bob Thomas) told me they had a spot for me,” he said, “so I was pretty grateful for that. I’m happy I’m here now.”

Murrell, who has only one RBI in 34 at-bats in 2019, went 1-for-2 as a pinch hitter and defensive replacement on Saturday in the Red Raiders’ 5-3 loss to Michigan.

“It was awesome,” he said of his first College World Series appearance. “I’d dreamed of that since I was a little kid. It was pretty cool.”

Texas Tech players have embraced the two since Day 1, according to Tadlock. They have also been great teammates every step of the way.

“They've performed and it's pretty easy when you come in and you work hard and you prepare the right way, and you get some results along the way."

“I’m not really too concerned about it,” he said.

CORRECTION: An earlier version of this story incorrectly identified Easton Murrell as a redshirt freshman instead of a sophomore. The error has been corrected.