State of the Hogs: Arkansas should feel good about 2020 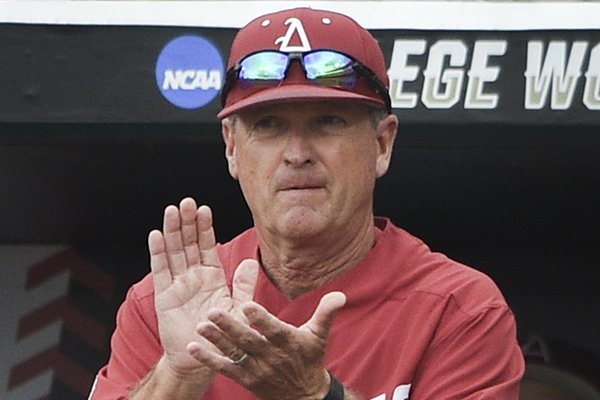 FAYETTEVILLE — If anyone thinks the Arkansas baseball team will slip next season after back-to-back trips to the College World Series, they should listen to Dave Van Horn in his season wrap-up Monday.

Van Horn didn’t make any predictions because there is still work to do to make sure everyone in the latest signing class makes it to campus. All of the drafted newcomers say they will turn down pro offers.

Van Horn can’t ever remember a complete class sliding past the big checkbooks of Major League Baseball. It could still happen, but Van Horn is wary.

However, it is the trend. More and more, the top college programs – and that goes double for those in the SEC where spectacular stadiums are the norm and charter jet travel is common – are getting their top signees to school.

“It’s kind of flipped,” Van Horn said of the recent pro draft that was top heavy with college players in the early rounds.

“They see high school players as too risky. They want to see how the college players react to the grind.”

There are too many instances of top high school players giving up in the minor leagues.

“Some of the high school kids don’t fight (for long),” Van Horn said. “The college players are more realistic and know (the grind).”

The pro draft still gobbles up big-frame pitchers with high velocity and will go out on a limb some on lefty pitchers and hitters.

MLB teams are still capable of turning some heads late in the process over coming days with a big signing bonus, but Van Horn feels good for the time being.

For the purposes of this column, I’ll focus on the position finds in the signing class. It may turn out to be unusually strong. It’s one of the reasons Van Horn thinks next year’s offense won’t see a drop from the last two years when the Hogs were among the nation’s best.

Returning are Matt Goodheart, Heston Kjerstad and Casey Martin. All are capable of leading the SEC in a category or two. Casey Opitz, Christian Franklin and Jacob Nesbit are also returning starters capable of making jumps.

But the cause for much of the optimism is some of the position players who should be on campus soon. Outfielder Chet Allison of Fresno (Calif.) City College has turned down a nice offer from the Dodgers. He’s a likely starter.

“We’ve got three or four freshmen who can really swing the bat,” Van Horn said. “They can get in the lineup. It’s going to be a lot more competitive in the fall.”

It wasn’t competitive in the field last fall. Coaches knew who the starters were likely to be early in the semester.

The key might be the kind of jumps returnees like Kjerstad and Martin make at the plate. Both are projected as high draft picks, but could there is more in the tank for both offensively.

Martin led the team in hitting as a freshman at .345, but hit only .286 this season. His strikeouts jumped from 64 to 79. His walks stayed virtually the same: 30 this year after drawing 27 as a freshman.

“For both of them, it’s going to be about strike zone awareness,” Van Horn said. “They have to stop getting themselves out.

“Heston had a good year. He hit 17 homers and over .300. But if he improves his strike zone awareness, he can make a huge jump.

“They need to flip their walks and strikeouts. They can hit in the high .300s, even in this league.

“If they can see the ball and recognize pitches, they will make a jump.”

Van Horn pointed to Dominic Fletcher as an example.

“Dominic quit swinging at pitches in the dirt,” Van Horn said. “And he went up in the draft. Improvement in strike zone awareness made him a lot of money.”

“He could bat anywhere in the lineup for us next year,” Van Horn said of Goodheart, who batted third for most of the 2019 lineup. “He could hit leadoff because his pitch recognition is that good.”

There is one asterisk with all of that. Van Horn said the worries about the draft could ruin some juniors.

“Martin and Kjerstad need to just relax and not let the draft get them,” he said. “If they do that, we will have a really good team.”

OK, there you have it, a little bit of a prediction, probably a little unlike what you generally get from a college coach this time of the year.

I’ve thought for some time that 2020 would be a really good season for Arkansas baseball. There are things that must fall in place, like the bullpen. Van Horn admitted as much, but the arms are going to be there, too.

“Right now it’s about development,” he said. “We have to continue to get better.”

I tend to take that for granted with Van Horn teams because he’s earned that with past performances.

The other thing that’s clear is that just going to Omaha isn’t the only goal for this coaching staff. Van Horn and his assistants, Nate Thompson and Matt Hobbs, are focused on winning a national championship.

It was mentioned that Van Horn is now the active leader in CWS appearances with eight. That mark was with Mike Martin, but the Florida State coach retired.

“What I can say about that is that he proved you can be a good guy and win,” Van Horn said. “He was tough.

At that revelation, Van Horn’s usual dry demeanor broke for a second. There was a laugh.

Obviously, there was no mention of winning a championship Monday, but there was nothing from Van Horn at the season wrap-up to raise any doubts that 2020 could be the year.