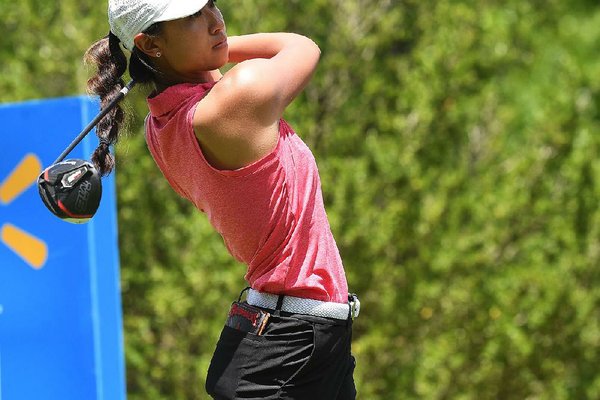 Arkansas’ Dylan Kim shot a 3-under 68 during Monday’s LPGA Northwest Arkansas Championship qualifier at Pinnacle Country Club in Rogers, earning a spot in this week’s tournament.

ROGERS -- Muni He fired a 4-under 67 to secure a berth in the LPGA Northwest Arkansas Championship on Monday with the day's best round in a qualifying tournament at Pinnacle Country Club.

The University of Arkansas women's golf team had three team members in the qualifier, and Dylan Kim took full advantage to earn the second spot with a 3-under 68. The LPGA Tour event will take place Friday through Sunday.

Kim's round was all the more remarkable after carding a 7 on the par-5 No. 2 hole, but she steadied herself after that to finish a stroke behind He.

She played with a new set of clubs after she'd struggled in several recent events. The move turned out to be a good thing.

"I think it made a big difference," she said. "I think the reason I was struggling was because of the clubs, so it's nice to know that changing to a different set worked."

Brooke Matthews, a Razorbacks golfer from Rogers, missed the cut after shooting a 1-over 72. She said the experience was something she had dreamed of since she started attending the tournament as a young spectator.

"This was just so special to play out here today," Matthews said. "I've been coming out here forever and watching the girls and watching the Razorbacks get to play every year, so to get to finally have my chance was awesome."

Matthews said the experience of playing in the Monday qualifier in front of a number of hometown fans is something she will carry with her into her sophomore season at Arkansas.

"Obviously you want to play well in front of your home crowd, but I try to just take it and focus on the golf," Matthews said. "This just shows you where hard work can take you. This was one of the goals that I've had for a while, so it's really cool to get to have that done."

He, 20, a rookie on the LPGA Tour this season, had a bogey-free round with a 35 on the front nine and a 32 on the back nine. She closed with a birdie at 18 to punch her ticket for this week's event.

"I had a very good tempo today," He said. "I was just very relaxed and was able to keep from stressing out too much. That was what made the round go really smooth."

He was in the first pairing of the day and took advantage of clear skies and temperatures in the low 80s. The recent rain also paid off with softer, slower greens, she said.

She is a first-alternate on the tour, which means she could have earned her way into the tournament without trying to qualify if several tour regulars opted not to play this week.

"It's not always very promising trying to get in as an alternate," He said. "You never know who might drop out before the first day of an event, so we decided to do the Monday qualifier just to increase my chances."

Ximena Gonzalez-Garcia was the other Razorback to participate in the qualifier. She shot an 8-over 79.

The professionals will be on the course today for practice rounds. The first round of play will begin Friday morning for the 54-hole event.

Hannah Green, who went wire-to-wire to win the Women's PGA Championship over the weekend, withdrew from this week's tournament.