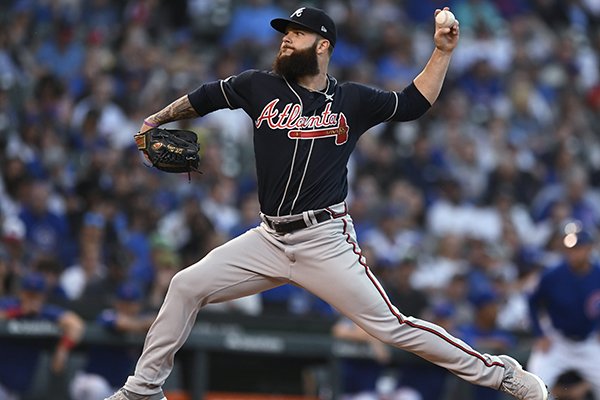 Atlanta Braves starter Dallas Keuchel delivers a pitch during the first inning of the team's baseball game against the Chicago Cubs on Wednesday, June 26, 2019, in Chicago. (AP Photo/Paul Beaty)

The left-hander earned his first win for his new team and Nick Markakis hit a three-run homer Wednesday in a 5-3 victory over the Chicago Cubs.

Brian McCann also connected for the Braves, who won a matchup of NL division leaders for the second straight night.

Keuchel (1-1) allowed three runs and eight hits over 5 2/3 innings in his second start with Atlanta. He remained in the game following a 48-minute rain delay in the fourth.

Keuchel gave up four runs, three earned, over five innings in a loss last Friday at Washington. After a long wait in free agency, the 2015 AL Cy Young Award winner signed a one-year contract with Atlanta on June 7 that pays him $13 million.

"It feels good any time you can get a win," Keuchel said. "The boys put it on early, so it was about as easy as I could draw it up.

"I need to tweak a few things and tidy a few things up, but I think I'm well on my way to where I want to be."

Keuchel is a groundball specialist and he induced the Cubs to hit into double plays in each of the first three innings.

"I think I'm going to be pleased with what I see from Dallas Keuchel about 98 percent of the time," Braves manager Brian Snitker said. "Another solid job."

Four relievers combined to get the final 10 outs and hold the Cubs scoreless. A.J. Minter went 1 1/3 innings for his fourth save. Minter came on with the potential tying runs on base in the eighth and struck out pinch-hitter Victor Caratini.

Willson Contreras homered and tripled, and Kris Bryant also connected for the Cubs.

Chicago starter Yu Darvish (2-4) had his string of 10 straight no-decisions snapped with the loss. He allowed five runs on five hits in five innings, walking two and striking out eight. He retired the last eight batters he faced after giving up Markakis' three-run drive with one out in the third.

"His stuff got better, he got into a rhythm late," Cubs manager Joe Maddon said. "There are things that we did to not help him. We still have to do better offensively with runners in scoring position. All the double plays we're hitting into. We made mistakes on defense."

Atlanta jumped on top 1-0 with a manufactured run in the first. Ronald Acuña Jr. led off with a walk, stole second and advanced to third on a throwing error by Contreras. One out later, Acuña scored on Darvish's wild pitch.

McCann made it 2-0 on a long shot off the scoreboard in right in the second, and Markakis' homer extended the lead to 5-0.

Contreras and Bryant hit solo shots in the fourth and fifth, respectively, to make it 5-2. In the sixth, Contreras tripled with one out and scored on a groundout by Jason Heyward.