Arizona State grad says he will transfer to Arkansas 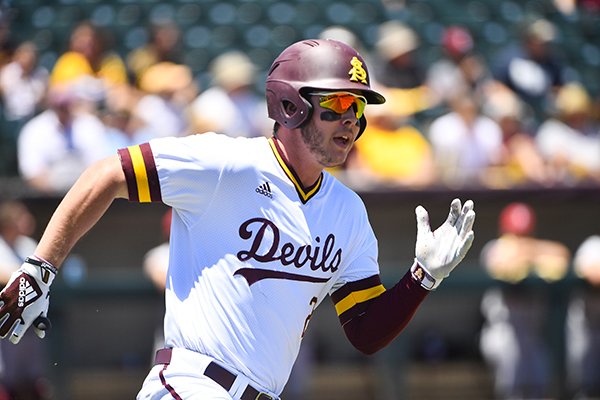 Arizona State's Cole Austin runs toward first base during a May 2019 game against Stanford in Phoenix.

FAYETTEVILLE — Infielder Cole Austin announced this week he is transferring from Arizona State to Arkansas via the NCAA’s graduate transfer rule that allows players immediate eligibility.

Austin, who will be a redshirt senior in 2020, battled a back injury for much of the 2019 season and played in only 10 games as a designated hitter and right fielder.

Austin (6-2, 190 pounds) transferred to Arizona State from West Virginia following the 2017 season and redshirted in 2018. He started 97 games predominantly at third base in two seasons with the Mountaineers.

As a sophomore at West Virginia, Austin batted .302 with 13 doubles, 2 triples, 7 home runs and 44 RBI, but struggled defensively with 11 errors and had a .936 fielding percentage.

At Arkansas next season, Austin would be one of two transfers with Division-I starting experience in the infield. Coby Boulware, who started 54 games as a second baseman at TCU in 2018, will be eligible next season after redshirting the 2019 season with the Razorbacks.

God continues to bless me with opportunities, and I could not be more thankful. Proud to say that I will be playing my final year as a graduate transfer at the University of Arkansas. Go Hogs! https://t.co/kGNUakYAXj