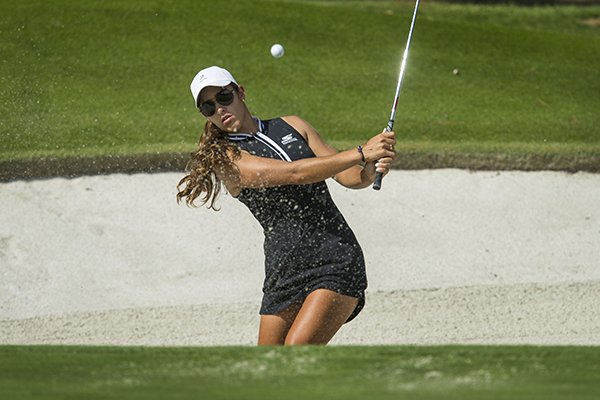 Maria Fassi hits from a bunker on hole No. 7 Tuesday, June 25, 2019, during the practice round for the LPGA Walmart Northwest Arkansas Championship at Pinnacle Country Club in Rogers.

ROGERS — Six former University of Arkansas golfers are in the field for the Walmart Northwest Arkansas Championship this week with one making her professional debut at Pinnacle Country Club.

Tour veterans Lewis and Lopez showed their experience on day one. Lopez went 4-under on the front nine and finished with a 67, which puts her in a tie for 21st. Lopez birdied her first hole on the back nine and lost a stroke on No. 13, then parred holes 14 through 18.

“Having good momentum in the beginning is key for good confidence,” Lopez said. “I didn’t play my best golf in the back nine, but I gave myself birdie opportunities, and that’s all I’m looking for.”

Lewis, the former No. 1 player on tour, finished 3-under par, tied for 27th after the first round of the tournament with a 68. The Woodlands, Texas, native and new mom had one bogey and four birdies. Her lone bogey came at the par 4 No. 4.

“I felt like I played pretty solid,” Lewis said. “I would have liked to have made a few more putts, but other than that, I’m pretty happy with the way I played.”

Fassi, who just won the NCAA Division-I Golf Championship, finished 1-under 70. The recent graduate and native of Pachuca, Mexico, was even-par on the front nine, and started off the back nine with two birdies. She lost one stroke at No. 18 her chip from the bunker rolled well past the hole.

“I think I did OK, I just played the par 5s terribly,” Fassi said. “It was a little frustrating, but overall I think it was a good round. I know I have so much more in me.”

Benton and Uriell each finished at even par, and Kim finished at 5-over, including an 11 on the par 5 No. 14, her fifth hole of the day.

Benton’s caddie was Razorback women’s golf coach Shauna Taylor, who has been at the helm for 12 seasons.

“I wanted to try and get her off to a good start,” Taylor said. “She pulled me out of retirement, so I’m going to give her all I’ve got.”

This event has long been known for its connection to the Arkansas women’s golf program, and the pro-Razorbacks crowd is something the alums enjoy coming back to Northwest Arkansas.

“It’s amazing,” Lopez said. “Just being able to share this week with them is super special. This means a lot to all of us. It’s unbelievable how much support we receive from the community.”

The Arkansas fans were out in force at the rowdy No. 17, showering the former Razorbacks with a Hog Call.

“It’s definitely my favorite hole out here,” Fassi said. “The crowds are unreal, and as a former Razorback, they love us.”