Arkansas rallies, then crumbles late in loss to Mizzou 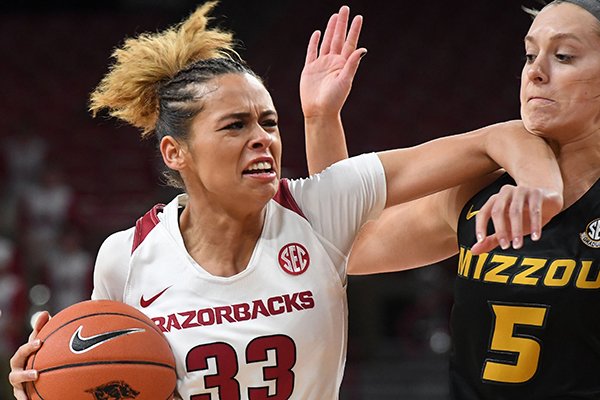 FAYETTEVILLE -- Finding itself down by eight at halftime after mightily struggling offensively, the University of Arkansas women's basketball team put together an impressive third-quarter stretch that garnered a four-point lead going into the final quarter.

Unfortunately for the Razorbacks, Missouri's fourth-quarter performance was solid enough to retake the lead and keep it as the Tigers (20-9, 9-6 SEC) spoiled Arkansas' (19-10, 8-7) final home game of the season with a 73-67 victory Thursday night at Walton Arena.

Arkansas senior guard Malica Monk made two free throws with 49 seconds left to cut Missouri's lead to 63-59, but the Tigers responded by making 10 consecutive free throws to seal the victory.

Missouri didn't find its offense until it was almost too late as the Tigers scored 36 points in the final quarter. Arkansas pulled within four six times in the final six minutes, but the Tigers responded with big shots to nix the Razorbacks' comeback attempts.

When Alexis Tolefree's three-pointer cut the lead to 58-54 at the 3:10 mark, the Tigers responded with Cierra Porter's three-point play. When Monk drilled a three-pointer with 2:38 to play, Porter hit two free throws on the other end. Missouri's penchant to respond was key in stealing a road victory.

Arkansas' third-quarter effort marked a complete turnaround from the first half, as the Razorbacks shot 9 of 17 led by Chelsea Dungee's 10 points. Arkansas outscored Missouri 25-13 in the quarter in taking a 41-37 lead into the fourth.

Missouri held a 28-16 halftime advantage. The Razorbacks shot 21 percent the first half, ensuring they'd have an uphill battle in the final two quarters. The Razorbacks missed 10 consecutive shots to end the first half, not registering a point for 6:34. During that stretch, they missed five three-pointers and a lay-up attempt 20 seconds before halftime.

Dungee led all scorers with 25 points. Monk had 16, while Tolefree and Jailyn Mason added 14 and 10 respectively.

Porter led Missouri with 21 points. Jordan Roundtree had 16 and Sophie Cunningham chipped in 13 for the Tigers.